Subjoi is one of the more polarizing names when it comes to the current crop of house stars taking the internet by storm. Hailing from Australia, he’s one of a number of versatile stars emanating from the Southern hemisphere; a section of the world championing a multitude of genre bending sounds, from house with the likes of Mall Grab and Sandboards, techno with Keepsakes and even more left field experimental sounds in the shape of Air Max 97.

With two vinyl releases under his belt from last year as well as shows all across Europe, Subjoi has successfully translated internet hits into tangible results and is looking to make serious ground on the international house scene as we enter an exciting year for electronic music as a whole.

With a headline show on the way tomorrow with Codework and the Building Society in Hangar’s warehouse, we caught up with the man behind ‘Love Shy’ and ‘The Way I Feel’, two of the defining tracks of the raw house wave sweeping the online sphere.

Many people have said that the scene down in Australia there is tricky to navigate, that it can be very clique-ish and that there isn’t a strong culture that supports electronic music, in terms of the government and regulations, would you agree? What’s it like as a clubber in Australia?

The culture is definitely there but it’s very tight knit thus the clique problem, but that’s to be expected. The main issue are the lockout laws in some states, entry to clubs is forbidden after 3 here in Adelaide and there are restrictions on what you can drink before that.
These were meant to stop street violence and all that but it hasn’t worked, drunk people are ending up stuck on the street after 3 and nothing good comes of that.
Melbourne trialed it before hand, found that it doesn’t work and scrapped it, now their clubbing scene is the best in Australia.

Is it hard to get booked from Australia for European shows?

It definitely is, especially from Australia. It’s a 22 hour trip each way so it only makes sense if you’re doing a lot of shows or come here for a holiday. It’s quite tough with full time work but I managed to get here this winter and hope to be back again real soon!

How are you finding your time in Europe, what’re the main differences for you?

It’s been going alright so far, I like busier cities so it’s a nice change from quiet Adelaide! The closeness of everything is the main difference, nothing beats being in another country after an hour of flying.

When you’re getting so much success and attention online is it tricky having to wait for vinyls to be pressed/samples to be cleared etc? Rather than just clicking upload, there’s obviously so much more that goes into the process of releasing a full EP on vinyl, do you think it’s worth it in the end?

The delay with vinyl can be quite annoying, there seems to be an issue with pretty much every plant and every record in some sort. Samples extend this process but it’s definitely worth to clear them for the peace of mind but sometimes it’s not financially viable. Most labels seem to not even worry about clearing them and just throw the responsibility on the artist so there’s always a risk.

What’re your plans for the upcoming year?

Mainly just to make music that I enjoy, if others dig it then great and if not then that’s OK too. Release wise in the near future, there’s a split vinyl EP with Ricky Razu, an EP on Piff Recs, VA with Nerang Recs and few more after that.

When you get loads of attention via YouTube and Soundcloud is it tricky to capitalise on when that content isn’t being hosted via your own pages?

I feel like YouTube seems to target a wider audience than Soundcloud, I don’t have a channel but I don’t feel like I’m losing out if others upload my tracks themselves. It’s just another tool for promotion that I don’t have to worry about. If people like what they hear then they will give you a follow on SC or social media and that’s good for me.

Is it hard to move away from the sound people hear in your tracks when you’re playing out? How do you stay in touch with the sound you’re known for and then move onto to different ones also?

The hardest part I found is to actually incorporate my tracks into the set list, I always feel like they’re not good enough but it seems to be me since people enjoy them on the dance floor. I play tracks that I dig, so if people like my tunes then they’ll most likely dig the selection. 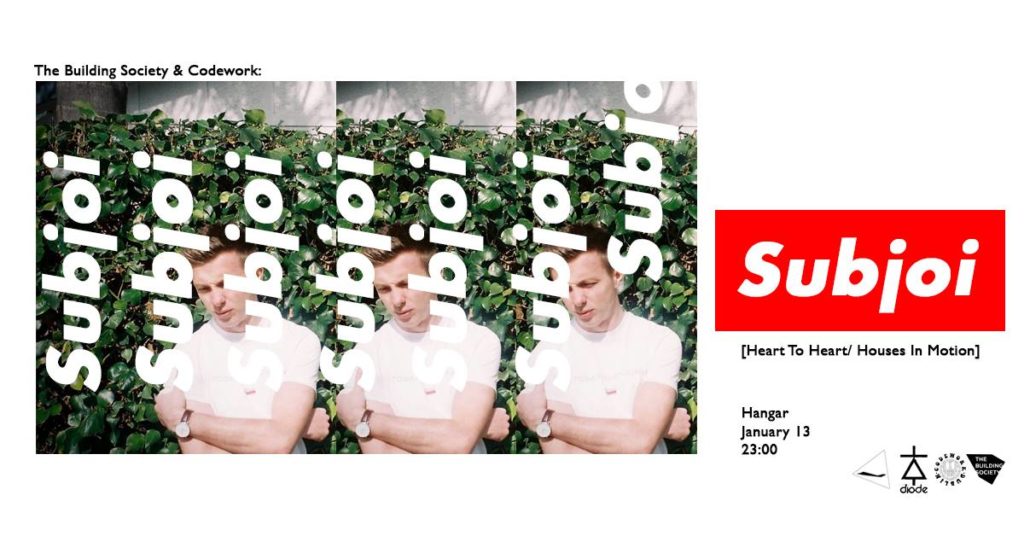 Subjoi headlines Hangar’s warehouse on Saturday night with support on the night coming from Codework DJs and Cóilí Collins, you can join the event here.