With a diverse lineup consisting of legends old and new, local and international, it’s deeply disappointing that after a summer of heavy promotion and even a change of location another independent festival will not be taking place this summer.

It’s with a heavy heart that we bring you the news that Scrobarnach festival, set to take place in Cork on the 11th of August, has been cancelled due to regulatory issues that are beyond the control of festival organisers.

This news comes in the wake of the cancellation of BARE in the woods, another independent festival, leaving the organisers with a full line up of acts to cancel and a host of festival goers to refund.

With all that being said, some of the collectives that were supposed to be involved have promised to host some of the acts that were on the lineup in various venues. Check out Subtech and DIE’s latest event in Limerick to keep up to date.

Read the festival’s official statement below: 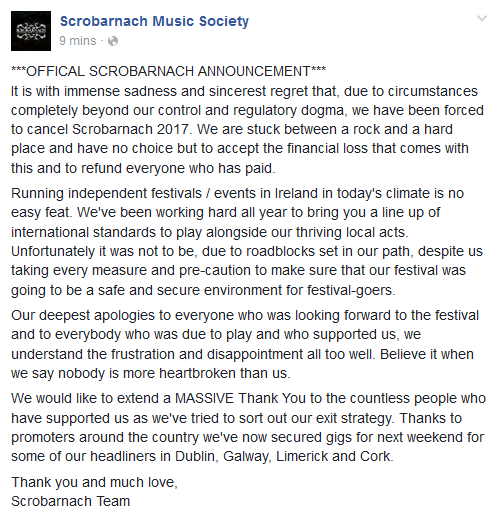