DJ Seinfeld’s album is the perfect soundtrack for unrequited love

It’s Valentine’s Day. If you didn’t know, you know now.

If you’re one of the lucky ones with a significant other, this article will probably serve as nothing more than a hub to get good music that you’ve probably heard already. If you haven’t heard the Swede’s debut album, you should probably hit play right now.

Valentine’s day is most definitely a good day in the grand scheme of things, but for those among us that aren’t necessarily feeling the love, it can be a pretty unforgiving reminder of how lonely you really are.

We had a quick brainstorm and rather than doing a list of the greatest romantic electronic music tracks, we decided to take things a step further. We came to the conclusion that as electronic music goes, it’s flirtations with the themes of love and affection are definitely apparent [See: Daft Punk – Digital Love], however they don’t usually strike the same chords as other genres tend to do.

With that being said, we only had to look as far as the Button Factory this Saturday to be reminded that one of the most impressive electronic conveyors of emotion is coming to town.

At this stage, you’ve probably heard each and every music outlet ranting and raving about DJ Seinfeld’s debut album, despite the fact that some were pretty quick to bury the producer when he first surfaced along with a wave of similarly goofy-named lo-fi hose producers and DJs. Since then, the story is well chronicled; that he conquered the doubters and rose to the lofty heights of Rolling Stone’s top 50 albums of the year.

The album that got him there, ‘Time Spent Away From U’ is famously inspired by a breakup, as detailed by the man himself in his interview with us from New Year’s Eve.

“Yeah. I just wanted it to be a very honest album… when you’re going through an intense period in your life with stuff like separation, it’s going to be those things that influence you the most.”

We get serious break up vibes from the get go with ‘I Hope I Sleep Tonight’, an upbeat but still melancholic title that runs through the entire medley of drums within the opening tracks.
We move swiftly on to ‘I Saw Her Kiss Him in Front of Me and I Was Like WTF?’, which is a bustling club track drenched in paranoia and anger that we’re again led to believe stems from the suggestive title.

The album then leads us through an uplifting period that makes it seem like everything is OK, but we’re quickly torn from the catchy piano riffs and misty drums back to reality with the frenzied ‘It’s Just My Luv’, which feels like a sleeplessness night spent flicking through old pictures on Facebook and Instagram.

“It’s a very personal album and I wasn’t feeling too well at that time but when you’re starting to feel better, you look back at that time and wonder ‘why’.”

Real life is further insinuated on ‘How U Make Me Feel’, as the repetitiveness of the day to day spent alone sets in and trips to and from work or beyond are made even more miserable now that they’re doomed to be spent alone. 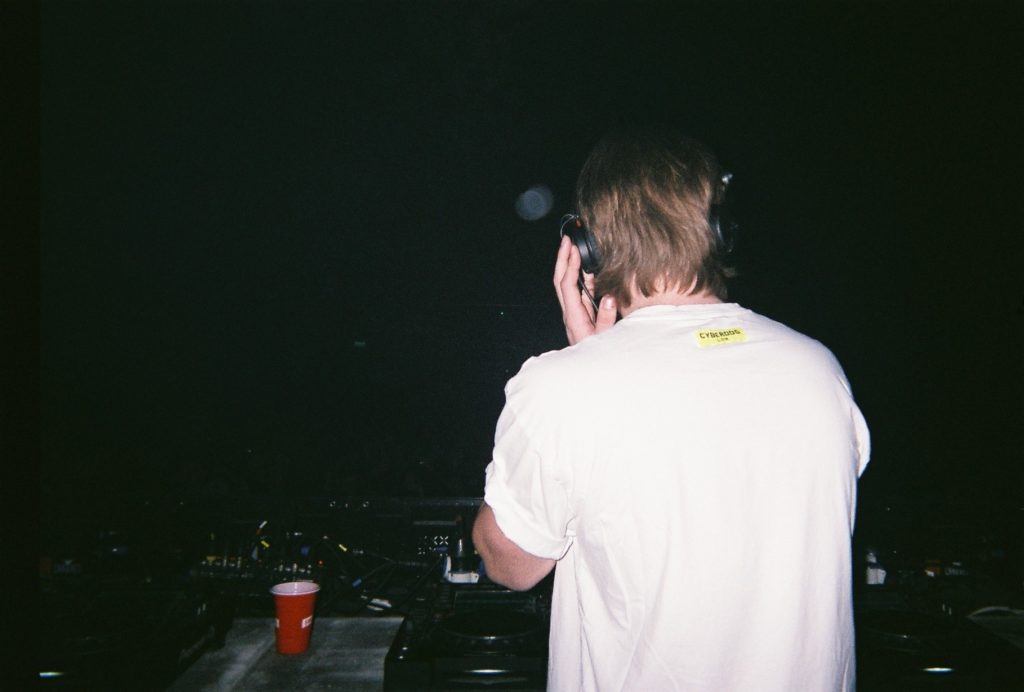 Acceptance comes next with the back to back tearjerkers in ‘U Hold Me Without Touch’ and ‘Come Thru For U’. Seinfeld’s pitch perfect blend of samples, drums and muffled piano all come together for the backbone of the album and could really take someone from being down in the dumps to not exatcly cloud nine, but feeling somewhat better about the endless pit of Ben & Jerry’s populating the bin that’s now made close acquaintances with the TV and army of blankets making up a wistful bedroom.

“Breakups are always going to sell, because there’s always someone going through that right now, somewhere. For me, it’s easier to write a sad melody, even if I’m fine. Maybe I’m just a sad person.”

Just as you think you’ve made it through the worst of it, you might get that subtle reminder of the individual that broke your heart. ‘U’ is that reminder. We’ve all heard the song since it’s late 2016 emergence on YouTube channel Slav and it hasn’t left us since. The piano is perfectly measured and it’s shaping up to be a classic lo-fi banger, however the breakdown initiates a sense of raw emotion almost immediately as the kick drums.

Bob Geldoff comes in with his undeniably poignant speech about his split from his wife and it would be enough to make Stone Cold Steve Austin shed a tear. Have fun getting over this.

If you’ve made it through this album and finally gotten past the frame of your bedroom door to make contact with the outside world, DJ Seinfeld headlines the Button Factory this Saturday, with support coming from KETTAMA and Jack Thompson. You can join the event here.