The 17 most iconic Daft Punk things in existence

We decided to play around with the best ‘things’ because the French pairing have had their hands in so many things, that it was difficult to just narrow it down to tracks or videos or Christmas decorations(?).

BBC recently released an extensive documentary on the groundbreaking producers which is a great, contextual insight into how exactly they’ve risen to the peak that they now sit atop. The tell all that features interviews with Busy P (Their manager) and many more that were involved from the start as well as live clips from the beginning until now. With all that being said, the documentary is entirely positive the entire way through and doesn’t necessarily present any counter arguments at any points, it just heaps praise on them the further on the doc progresses, painting a rather one sided picture.

At the time, nothing seemed to make any more sense than Daft Punk scoring the Disney-produced remake of the classic, video game-inspired film. Despite not presenting too many hits and instant classics, the score and their work with an 85 piece orchestra is rather seamless and works equally well as a full feature album as it does with the film itself, with the pair even making an appearance on screen.

15. How they got their name

Not too many people know that Daft Punk originally went under the name ‘Darlin’ and had a third member, Laurent Branocwitz. The trio kicked off their careers as a rock band and sent a single ‘Cindy So Loud’ to the English magazine Melody Maker, where it was described as Daft Punk. This prompted the three to disband; Guy-Manuel and Thomas formed what would turn out to be arguably the most important electronic music band of all time, while Laurent became a part of the reasonably successful rock band Phoenix. 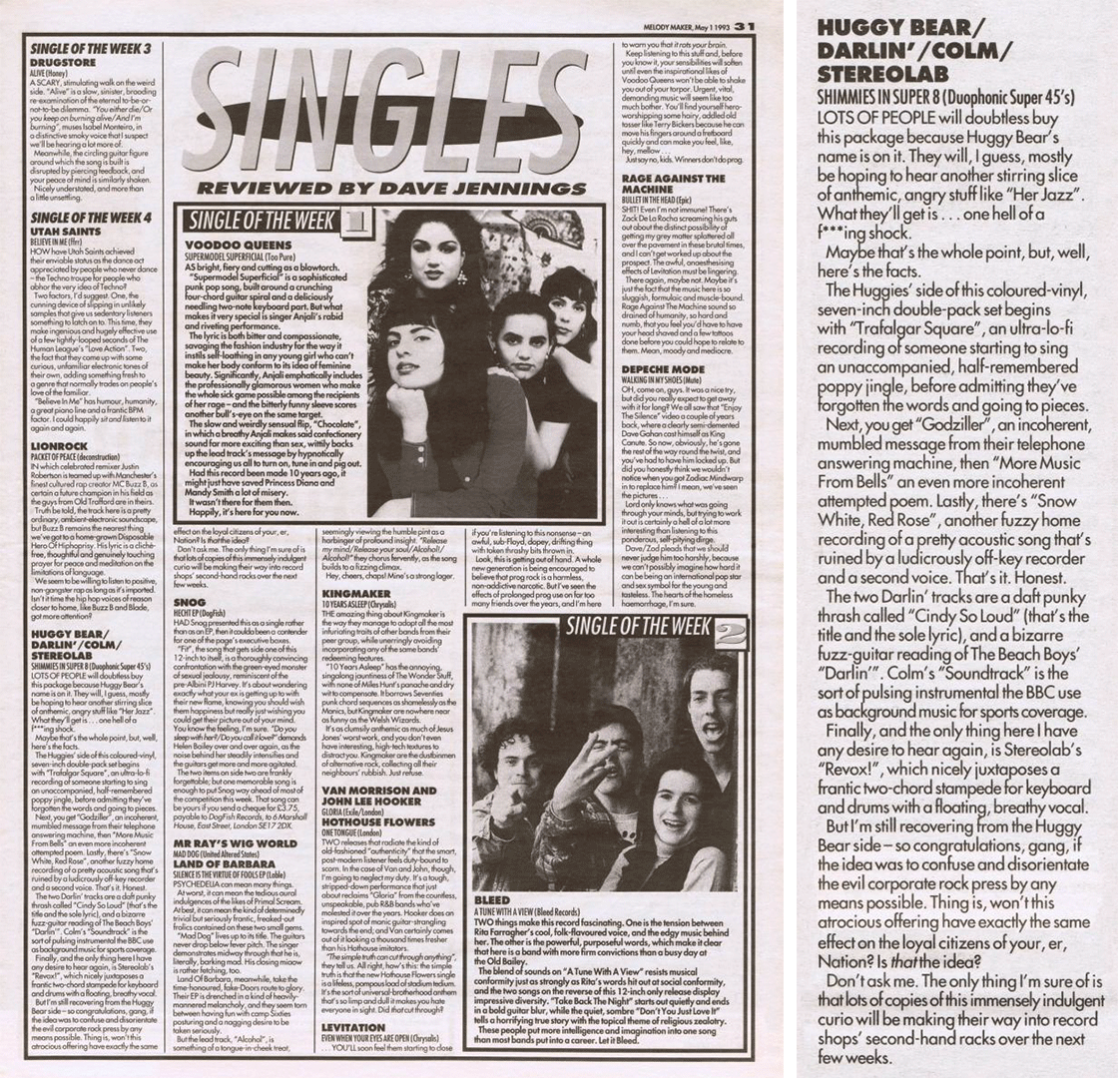 No, we were not lying when we said the pair had dipped their toes in the seasonal decorations market. They release Christmas decorations each year that’re available to buy from their website and are definitely the best stocking filler for any dance music fan. 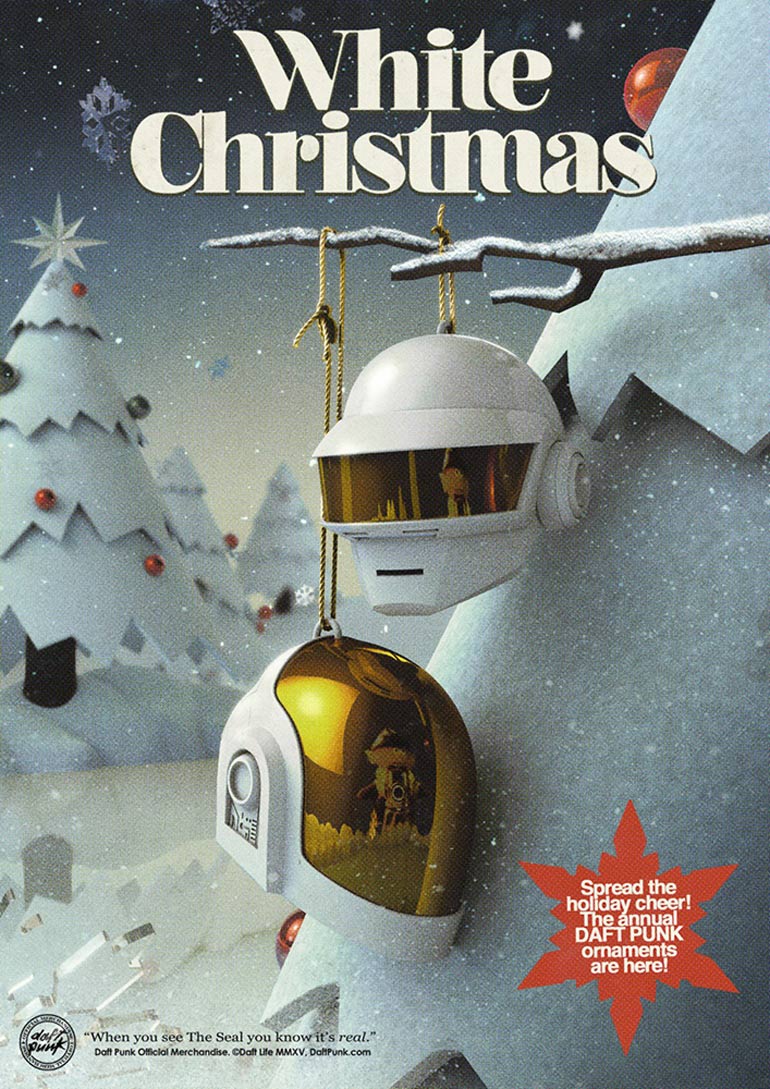 Before they were robots, the duo toyed around with a range of different masks. None were ever a permanent fixture, making the title ‘original’ a touch misleading, however, seeing some of their more outlandish and discount ideas in comparison to their iconic, hi-spec robot helmets is interesting to say the least. 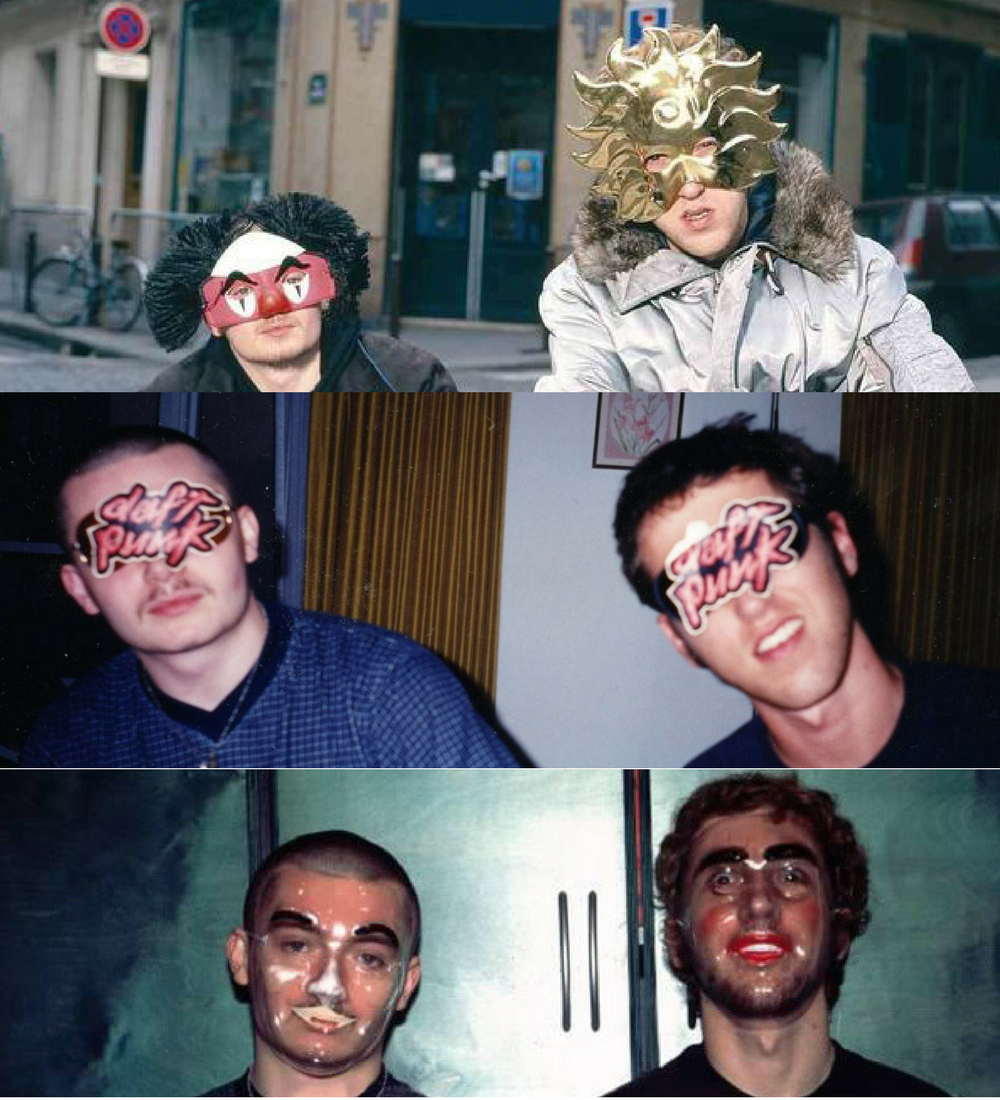 When it comes to Daft Punk live albums, Alive 2007 will always wear the crown. It’s older brother ‘Alive 1997’ is a recording of the duos set around the time of the release of their debut album Homework and is definitely a Four Four favourite. It goes without saying that ‘Alive 2007’ is a musical masterpiece across all genres, but when it comes to club music, the 1997 edition is unrivaled. The 45 minute mix features an endless amount of live edits of some of their most iconic tracks, plenty of that bedroom studio distortion that masks their debut album and the overall, sweat inducing, pulsating, samba-like kick drums that’re a clear reminder of the late 90s house and techno.

In the Unchained documentary there are plenty of hints that both Bangalter and Homem-Christo have released plenty of music under different aliases, both together and solo. As mouth watering a possibility that is, we don’t have any solid proof. What we do have however is a collection of work from Bangalter under his real name that make for some of the best club orientated house tracks you’re likely to hear.

Whether you thought it was selling out or not, Daft Punk’s work with Kanye West, The Weeknd and Pharrell Williams just further solidifies their legendary status. ‘Stronger’ is one of Yeezy’s biggest hits and one of the most iconic tracks of the noughties, while ‘Get Lucky’ and ‘Starboy’ are two of the most played tracks of the post 2010 era. While some might see it as an easy way to shine under the mainstream’s spotlight, the pair have had their fair share of media coverage for their own work and their collaborations more so solidify them as production masters than sell outs.

The club banger taken from their debut album is always a love or hate track for fans. The ear splitting is either the perfect mix of distorted euphoria for lovers of harsher sounds or an instant ‘turn it down!’ from people who don’t quite get why a crackling headphone jack should be used as an effect in a track. With all that being said, seeing Bangalter performing the track live in 1996 is something else.

8. Their work with Soma

It’s well known that without the Scottish pairing of Slam we might not have ever been able to discover Daft Punk. They both met at a rave and exchanged a mixtape that included their debut single ‘Alive’ which the Scots decided was good enough to release on the iconic techno label Soma. Since then they went on to negotiate a partnership with Virgin Records, however their early work with one of the most influential techno labels got them the platform they needed and showcased some of their rawer material, including ‘Drive’ which was released on a Soma compilation a couple of years back.

The pyramid is one of the most staple images when it comes to Daft Punk. The documentation of the tour is one of the best parts of ‘Unchained’ and really took the world by storm when it was launched at Coachella. For the many unfortunate ones that weren’t in attendance, you can of course listen to Alive ’07 which chronicles the entire live mix and is easily the best electronic live album of all time.

Their relationship with film has always been one of the aspects that set them apart from many of their electronic counterparts. With the release of Homework came D.A.F.T.; a collection of their initial music videos. After Discovery there was Interstella 555; an anime take on the album’s soundtrack. While both movies were great in their own right, it was around the time of Human After All (possibly their worst album) where they released their best film; Daft Punk’s Electroma. The film was premiered at the Cannes Film Festival in 2006 and features no music from the pair. The abstract picture sees them thrust into a dystopian, robot-only landscape and is an intense watch.

5. Their work with Nile Rodgers

Nile Rodgers is the co-founder of Chic, one of the most iconic bands when it comes to disco and a living legend in the music scene as a whole. When Daft Punk revealed that they had been working with the guitarist on their Random Access Memories album it surprised a whole host of listeners but ultimately worked to showcase how gifted the two are and served as the perfect homage to disco, which is the main genre on their most recent album. Rodgers has worked with the likes of Jimi Hendrix, Madonna, David Bowie and a whole host of music legends including Daft Punk.

The track is taken from their debut album ‘Homework’ and is a really unique insight into who exactly shaped the sound of the album and ultimately their overall style. References to some of the most iconic house and techno names such as Jeff Mills and

One of the most important things the duo did in their early career was solidify themselves as their own bosses. Their deal with Virgin Records meant that their tracks were licensed through the label via their own production company Daft Trax. At the time, record labels had a lot more power than they do now and could control a huge amount of what acts were doing, including their sound, release dates and public image. Their ability to shape their own sound and public personas (or lack of) managed to amplify them to superstar status and ultimately made them the powerhouses they are today. While record labels don’t pose as much of an issue to today’s electronic music stars it makes you wonder what could’ve been for many of the early 90s and 00s stars of club music. 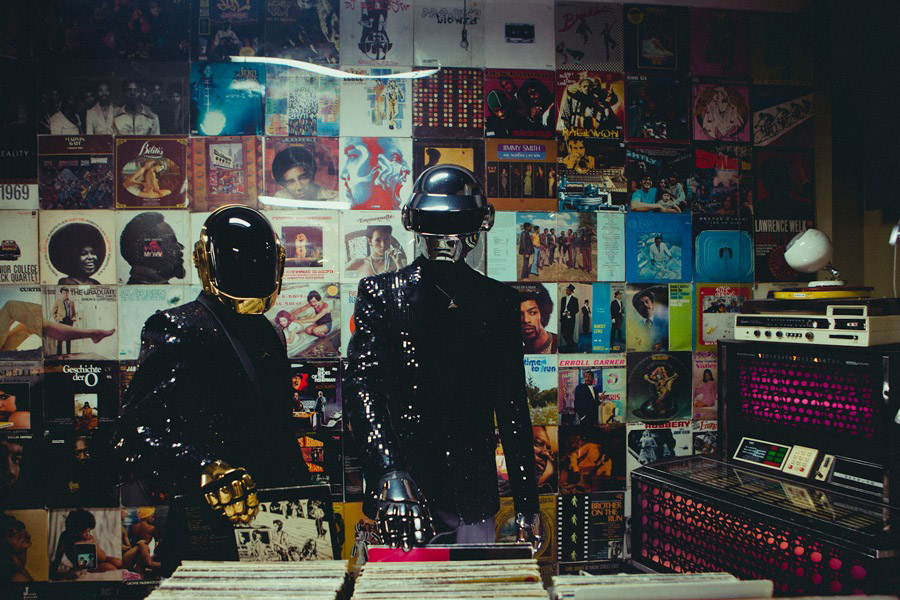 It goes without saying that the duo are the most sought after act in dance music and arguably in the top five when it comes to any act. The mystique that surrounds the pairing of Thomas Bangalter and Guy-Manuel Homem Christo is one of the most captivating things that has ever existed in pop culture and has propelled them to the lofty heights we now know them for. We cling to any sliver of Daft Punk hype that exists, including obscure binary hints as to their next live show or cryptic teasing of new releases. No one quite captivates their audience like Daft Punk does both visually and sonically but also mentally, a feat that hasn’t really been repeated since their inception. 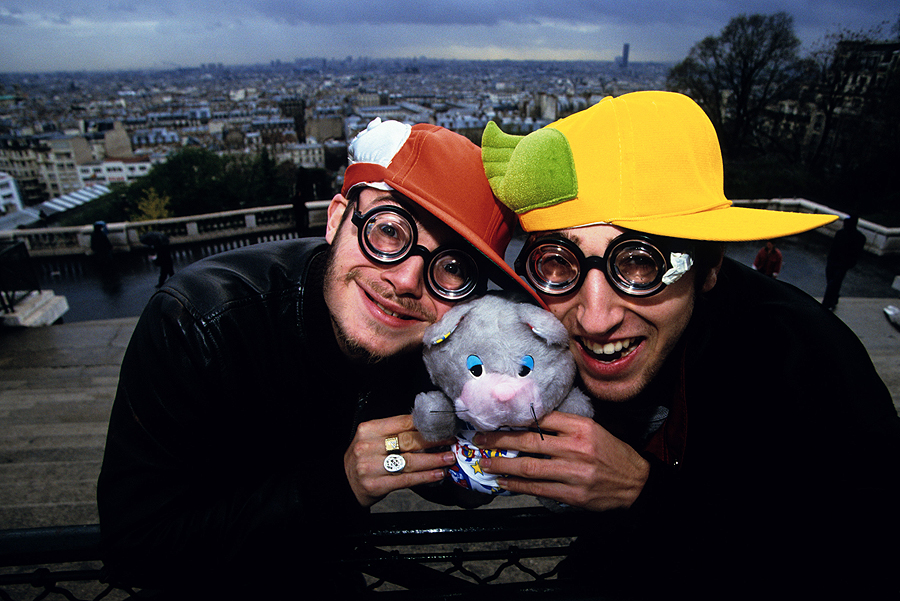 As a house and techno magazine we couldn’t help but place their debut album at the top of our list. The 1997 album is one that definitely changed the game and served as the perfect indicator of the pair’s uniqueness and flexibility; being able to host ‘Da Funk’ and ‘Around the World’ on the same album as ‘Burnin” and ‘Revolution 909’. The album is a house and techno bible and arguably the most influential collection of tracks electronic music has ever seen. 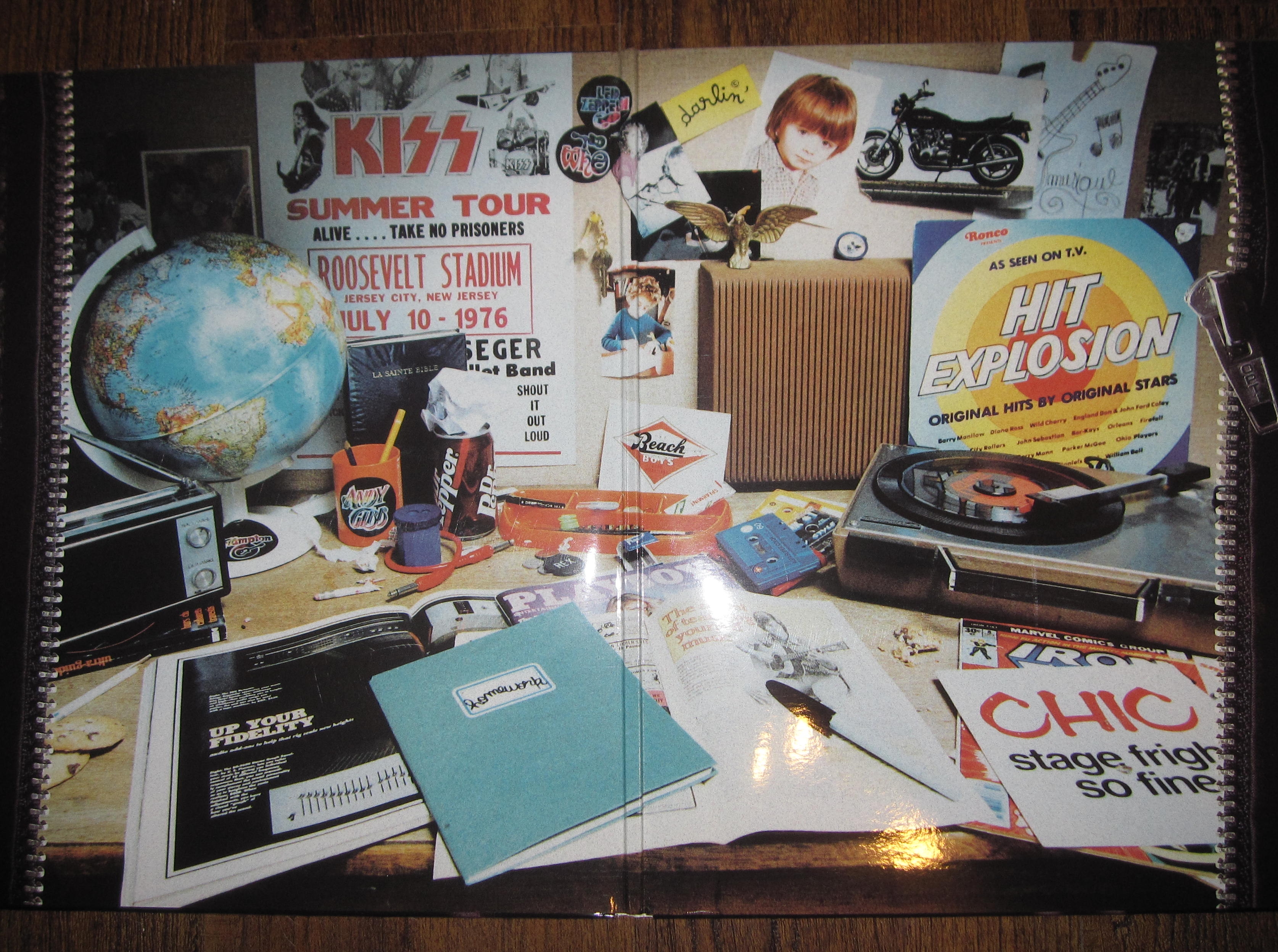