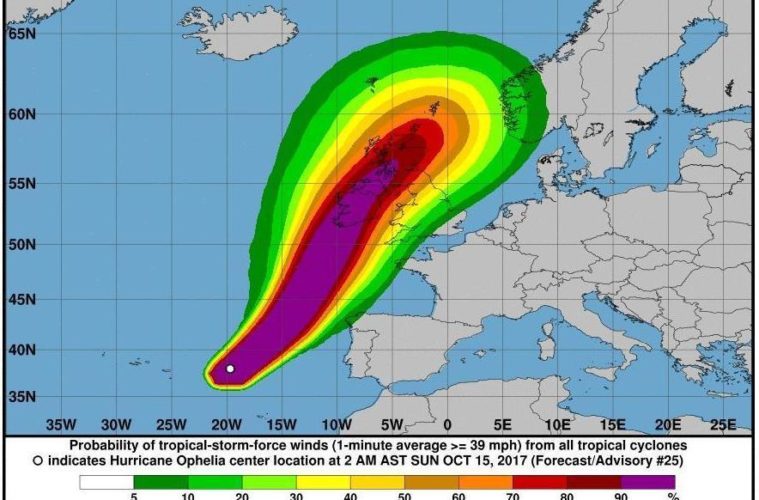 5 mixes to listen to during a hurricane

If you’ve been living under a rock or still use dial up internet, you’re probably unaware that we’re in the midst of what’s been labelled as the worst storm to hit Ireland in 50 years, AKA ex-hurricane Ophelia. Nothing worse than an angry ex.

All (terrible) jokes aside, it’s officially a day for the ducks, so we’ve put our collective heads together and decided to chalk down the best 5 mixes to listen to at the moment, whether you’re cosily in bed or anticipating a tree to come through your roof at any minute, beacsue there’s still a few hours to go.

With this being a problem unique to Ireland, who better to kick it off with than the island’s Aussie favourite? You’ve all more than likely watched his Boiler Room a thousand times, so here’s a fresh mix coming live from Scottish collective Overground, who’ve hosted himself along with the likes of DJ Seinfeld, Legowelt and most recently Minor Science. House vibes to take your mind off the impending doom.

Dekmantel Boiler Rooms are always memorable both for the crowd’s energy and how underground some of the sets go. The Bristol native somewhat embodies a hurricane with this mix, seamlessly combining tracks across house, techno and electro into an hour of music that’s guaranteed to symbolise the variety of debris in your garden tomorrow morning.

This one is for anyone who isn’t scared of a bit of wind and rain. Rather than distract yourself from Mother Nature’s fearsome hold on the country, you’re going outside (without a coat on) and going about your daily business because back in your day hurricanes were stronger! In all seriousness, this is one of the standout sets of the year, along with a few others recorded at Katharsis.

To be honest, you could easily just flick through all of Mumdance’s Rinse shows from the start of the summer until now and find yourself a variety of different sounding mixes to coordinate with all the different weather you’re about to witness, but this is arguably the pick of the lot. That’s saying something when he’s had the likes of Sunil Sharpe, James Ruskin, Regis and DJ Vibes on there, but his combination with the anonymous Detroit legend makes for two hours of pure gold across an outrageous amount of styles and genres.

This is the perfect ambient end to a tumultuous evening. Peggy Gou’s rise to the top has been on par with today’s wind speeds and with good reason. In this hour long mix for Tim Sweeney’s legendary New York based show, she flies through ambient afro-vibed house and onto some unreleased bits, along with that classic house sound that has earned her so much recognition over the past year, the perfect soundtrack while the rain sounds like it’s going to break down your window.