Alan Fitzpatrick: “I won’t stop DJing unless I go deaf or I die!”

We all know who Alan Fitzpatrick is.

In Ireland especially, the man needs little to no introduction. He’s been one of Drumcode’s flagship DJs and producers for years on years, one of the most consistent on the planet and he’s been behind some of the biggest hits electronic music has seen in the past few years.

‘We Do What We Want’ almost solely triggered a full tour of Ireland towards the end of last year that went from city to city causing havoc on a Denis Sulta-esque scale. Despite this, Fitzpatrick himself has been vocal about putting the track to bed even with its commercial success, noting that he most definitely isn’t an overnight success and shouldn’t be defined by one track and one track only.

Still, whether it’s responsible or not for his popularity in Ireland, he is hosting his own sold out festival on possibly the biggest holiday in the country’s calendar, which is also named after the man himself.

We spoke ahead of the festival and if one thing stood out it was that the man that has been maligned by the underground is one of its biggest fans and strives to push forward leftfield sounds through his burgeoning label, We Are the Brave.

This is your first time in Ireland after your last massive tour, how are you feeling ahead of it, given that you have a festival named after yourself on the patron saint’s day?

“It’s been mad. I’ve got Irish roots, it’s a territory that has kind of taken to my style of music quite rapidly. I’ve played in Ireland so many times over the years but there’s a bit of a boom at the moment and it’s fun to play there. People are getting behind everything, as long as people are coming to see me play then I’m happy to come and play as much as possible.”

Is there much of a difference between you playing here and somewhere else?

“Definitely. You notice it straight away. The Irish crowd are one of the best in the world and I feel like I’ve got a special connection with everyone, almost as if I’m playing with all my friends.”

Yourself, Denis Sulta, Peggy Gou, Mall Grab and more seem to have this thing that resonates so much with Irish fans even if it’s not with strict fans of house and techno. What’s it like being treated as somewhat of a superstar and are there parts you don’t like?

“I’m enjoying everything. The only weird thing with it all is that you attract a lot of new and younger fans, people that haven’t got any sort of clue when it comes to your background. They’ve heard these two tracks when maybe there’s two hundred tracks before those.

“We Do What We Want, everyone knows that track, but you’ll get a lot of people that know that track and only that track and they come to events just to hear it. That’s fine, but it’s the ones that stick with you and want to hear all of your stuff and that’re hungry to see what you’re doing, they’re the ones I’m doing it for.”

There’s always been a huge divide between underground and mainstream fans. When you make a track that’s as big as WDWW plenty of die hard underground fans are going to ditch you, did you feel that that happened?

“Take a track like that, if you go on Spotify, you’ll see that it has 3.5 million plays. I’ve never had anything like that in my career. That track has crossed over into the mainstream more than any of my other tracks have by far.
That’s the track that made me crossover into these two worlds. It gets weird when I turn up at a gig and half the audience are massive fans of that track, with it being on the more commercial edge of the stuff I’ve done, and I play some raw 135bpm techno set, they go away thinking ‘What was all that about?’. It’s quite hard, you somehow have to get in the middle and cater for everyone that has bought tickets.”

One way you have bridged the gap between both is with your social media. We all know about your love for shoes and dogs but you’ve used it as a tool to communicate your thoughts on WDWW too, which has made you relatable on a human scale too.

“I like to stay as real as possible. I’m not one of those people that live one of those Instagram lives opposite to their real life. It’s funny because I always imagine when you see these DJs that think they’re super cool and they’re wearing this and that and posing here and there, at some point they’re probably sat at home watching TV like anyone else. 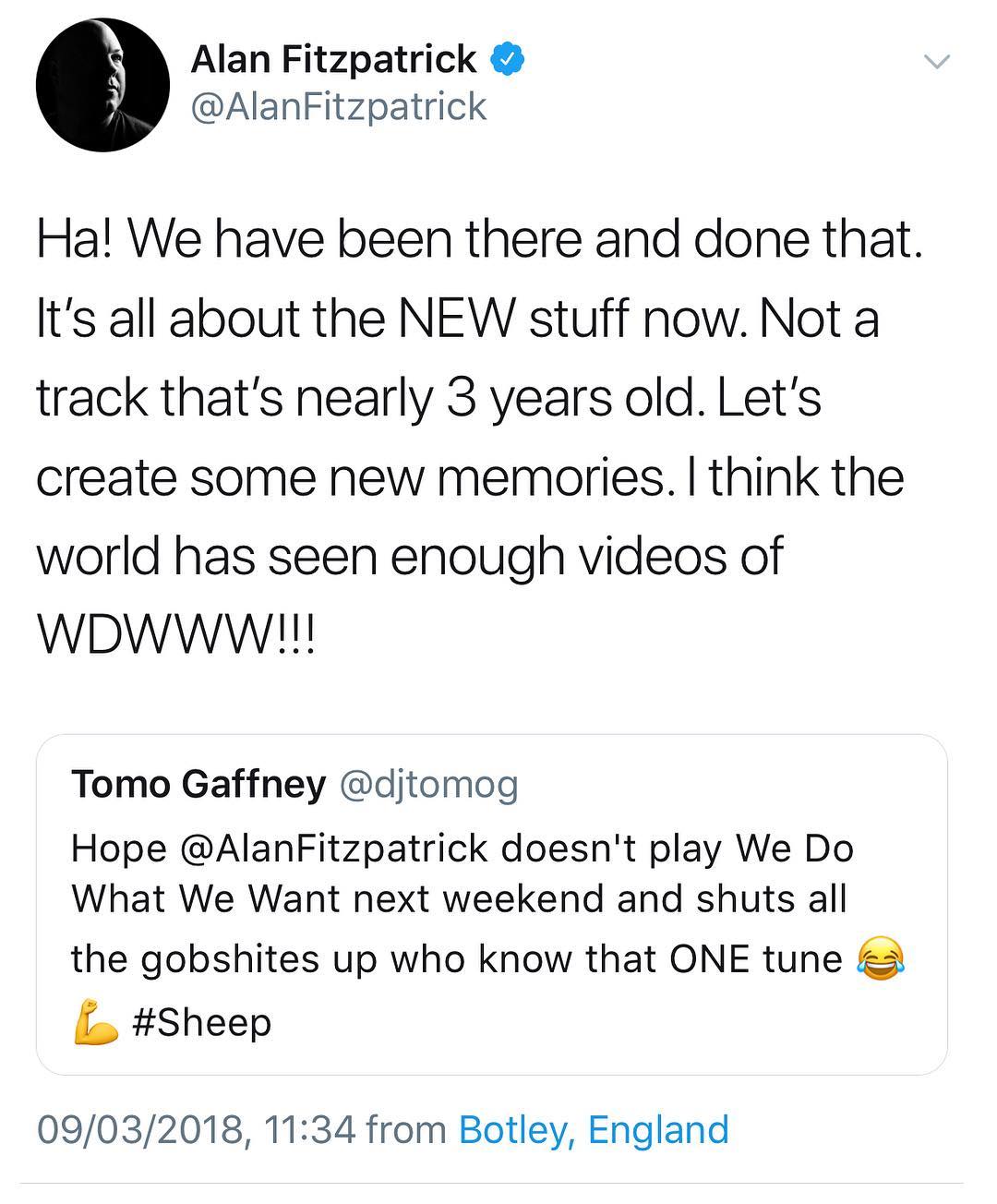 “They portray this image that they’re super cool all the time but at the end of the day, we’re normal people doing normal things and living normal lives. We’ve all got different jobs. I just try and stay in contact with that as much as possible and not just post all these things to look cool. These private jet pictures and all are lame. You’re best off being as normal as possible and resonating with your fans.”

You’re really heavily associated with Drumcode, but your own label We Are The Brave has really taken off given your own success.

“I’ve been with Drumcode for what feels like forever. I think my first Drumcode EP was Drumcode 56 and now they’re on 200 or they might have even gone passed that. I still work with Drumcode and I’m still doing EPs with them, but they’ve been very supportive of letting me have my own vision and legacy.

“At the end of the day, the best way to look at it is, if Adam Beyer wanted to look back at his life at what he achieved and built, the first thing he’d look at is Drumcode. He’s toured the world and given so many artists opportunities. For me, I wanted that as well. Obviously, DC has been a huge help in me doing that because it’s pushing me and my image so much. I’ve got my own baby to nurture and look after and effectively turn into my own Drumcode.

“It’s my own vision of artists, music and events. If I want to step back from DJing, I’ll have my own label to look after.”

Are you thinking of stepping back from DJing?

“No chance! I won’t stop DJing unless I go deaf or I die!”

Do you plan for it to have a distinguished sound like Drumcode does or do you want to be a free space for music like Erol Alkan’s Phantasy label is?

“I’ve always said that if it’s good I’ll put it out. People would look at labels like [Phantasy] and maybe think they haven’t got a creative vision but that is their creative vision, to put out good music. It doesn’t have to be pigeonholed.
I just signed a new guy called Leonardo and his stuff is a lot different to everything else on the label which is going to make people think. I want people to buy and listen to music and not know what to expect. As much as I love Drumcode, before listening to it you know roughly where it’s going.”

If you ever got the idea to start producing something completely different to what you are now, do you think there’s room for another alias given your already existing stature?

“The reason people do that is because it’s like a safety blanket people have so they don’t upset fans of a certain style. If my next three EPs and then my album came out and they were all drum n’bass, it would raise loads of different questions.

If I started an alias it would split that up which is cool, but personally I think the coolest thing is that the artist writes what they wanted to write and it all comes out under the one name because it’s just their creative expression.”

Regal attracted plenty of negative attention when he stated that producers should aim to make techno marketable. Is it tough to produce tracks the same way you did now that you’ve seen what sounds are more marketable?

“Generally, whenever I sit in a studio I just go with it. When I made WDWW I knew it was going to be a big track, it’s just one of those tracks. Before anyone had heard it, only management and mastering engineers, we knew it was going to be big, but it wasn’t necessarily written with that in mind. Some producers can go in the studio can sit in the studio and make tracks purposely for the mainstream, but I can’t do that.”

Alan Fitzpatrick’s returns to Dublin this December for a very special NYE EVE party in District 8. Pick up tickets and join the event here.