Bizarrely, We have to talk about Joel Corry…

We all know that Joel Corry is probably one of the last things we would usually feature here on Four Four but unfortunately, in a strange turn of events… we have to (sad face)

There’s been a pretty questionable Joel Corry track doing the rounds as of late, however, it’s been for all the wrong reasons

The track was removed from all platforms but we managed to find this link, which managed to survive the copyright purge yesterday

The track titled ‘The Parade’ is essentially a lazy attempt at a generic big room tech house ‘remix’ of Da Hool’s iconic ‘Meet Her At The Love Parade’ anthem from 1997.

Da Hool himself called out the track on social media yesterday afternoon after numerous attempts to have the track, which reached number 1 on the Beatport Tech-House charts taken down.

CR2 Records reached out to the copyright holders to try clear the sample for Corry’s track on three separate occasions and were turned down each time. The label then informed Da Hool and his team that Joel had gone ahead and released/promoted the track by himself. 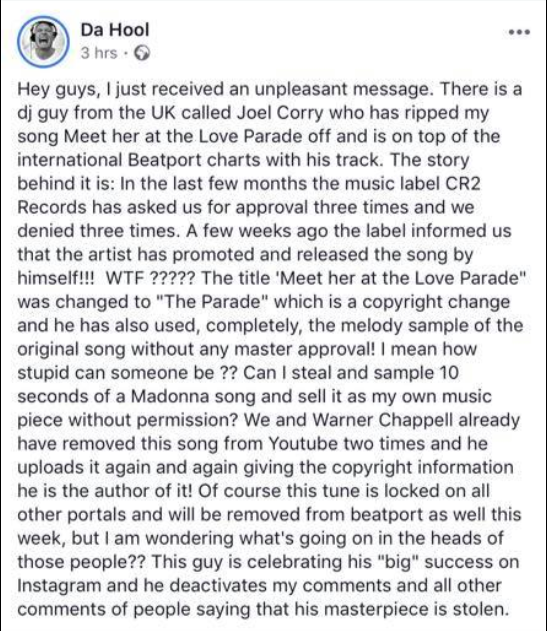