Karl GuestDecember 12, 2018News
Home
News
89
SHARES
ShareTweet
Subscribe
The Building Society Agency have unveiled an incredible new website today.
–
Since 2013, The Building Society have been heavily contributing to Dublin nightlife, running shows in clubs such as Opium Rooms, District 8 and The Twisted Pepper. However it was their involvement in weekly shows at Hangar from the time it opened it’s doors in 2014 to the time they closed earlier this year where they really made their everlasting mark.
–
Since then they’ve shifted their focus from regular club-shows to becoming an agency, representing some of Irelands most established and up-and-coming electronic artists such as KETTAMA, Tommy Holohan, Get Down Edits, Mark Blair and Quinton Campbell, to name but a few.
–
As a nod to their humble beginnings in The Twisted Pepper back in January of 2013, the new website has been heavily inspired by the artwork from their first ever event there, featuring Lone and Blonde.
–

–
To mark the occasion, they’ll be hosting a mammoth New Year’s Eve party in the infamous Wigwam basement (FKA Twisted Pepper), where it all began. The lineup on the night will see a number of the agency’s artists take to the stage, including; Adamant, Karl Guest, George Feely and DART. Some friends of the agency will also be joining them, in the form of Aidan Thompson and LPM.
–
They’ve also just announced two new additions to the roster;
–
Popka, a UK based house producer who has been making waves of late with some top quality releases on Nerang Records and uploads on the likes of Houseum, Definite Party Material and Maslow Unknown. Audiences all over the UK as well as in Lyon and Malta have been lucky enough to experience his rough house sound this year and that audience is set to grow even wider in the new year.
–
–
The other new addition is DAHRYL, a Belfast native with an ear for crunchy techno. With a release on JoeFarr’s ‘User Experience’ label already under his belt and his tracks receiving a lot of support from techno heavyweights such as Rebekah, Dax J and Amelie Lens, we’re expecting him to make a lot of noise in 2019.
–
–
While The Building Society are giving the basement a workout downstairs, the folks from District Magazine will be looking after proceedings upstairs, with performances coming from the likes of Bobofunk, Rebel Phoenix, Invader Slim, Marcus Woods, GXRLCODE, RTL and Sick Nanley.
–
Join the event page here and pick up tickets here.
– 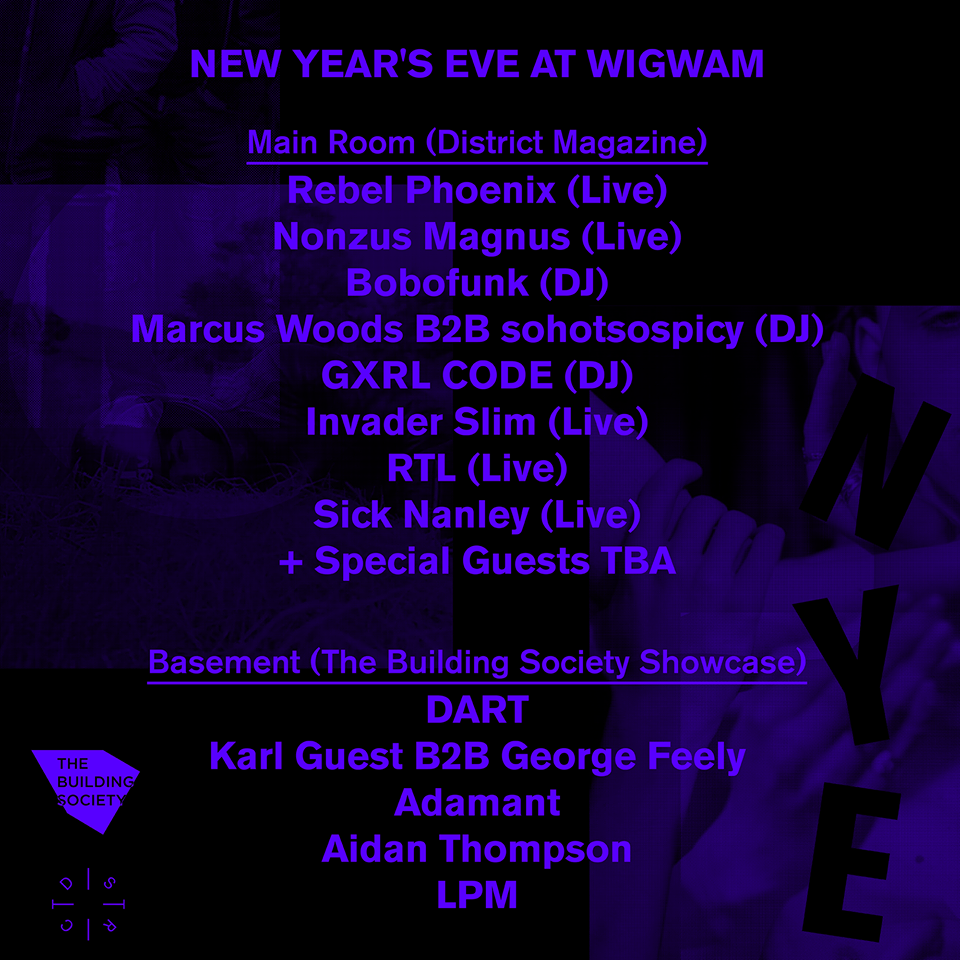