As every club around us seems to be closing, it’s easy to forget about the ones that’re still open, such as Galway’s Electric, which has been in business for six years now and is showing no signs of slowing down. After having hosted the likes of Young Marco, Jamie Tiller, Tommy Holohan, KETTAMA, Big Miz, Leon Vynehall and many more over the course of the past year, the club are looking to put an exclamation mark on what was another successful year in existence.

At the beginning of the month they launched a new concept night entitled ‘Family’, bringing together the fact that they themselves are a family-owned business and that they’ve played host to what’s become a wide family of DJs over the past few years. The first five weeks have been announced and include a range of Irish artists ranging from house, disco and techno to the more obscure tones of hip-hop, italo and beyond. Diversity of sound means diversity of DJs too, with the lineup being made up almost equally of male and female artists.

Their full lineup leads with disco icon Hunee who’ll be taking the reigns of their mainfloor three days before Christmas with support from Shivers’ Eoin. The club is looking to maximise its full space given that it’s one of the sole built-for-purpose clubs of its kind left in the country, something it definitely did last week for the promotion’s launch which featured a varied lineup of TR One, Cáit, Lolz and Handsome Paddy taking up the clubs three dynamic dance floors. Across December Family will play host to a takeover from Dublin Digital Radio as well as sets from Get Down Edits, Club Comfort, Shampain, Lerosa, Noid the Droid and many more; check out the full lineup below. 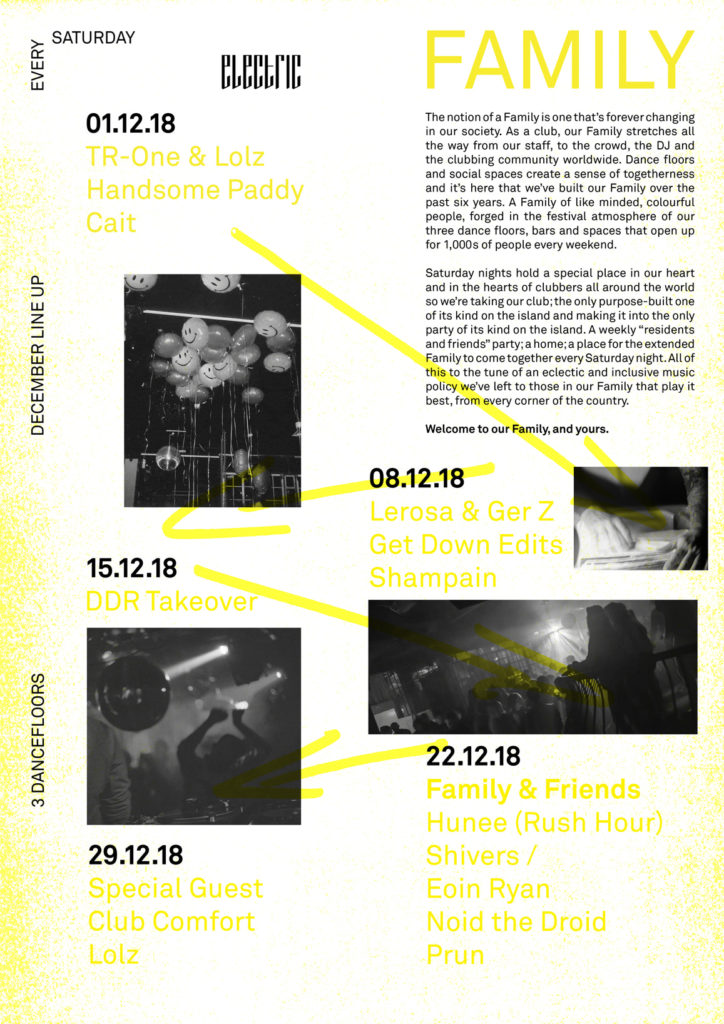 Tickets for each event can be found on Resident Advisor, with tickets for Hunee to be found here for anyone looking to make a trip to the west coast. This will be his first show in Ireland since his appearance at Forbidden Fruit and the after party which followed the festival.