Féile ’95 was the best lineup Ireland’s ever seen

1995 was a revolutionary year on a worldwide scale for a number of reasons. Windows 95 was released, eBay was founded, the Sony PlayStation was released, and South Africa famously won the rugby world cup.

In terms of music it was also a landmark year, with crossover hits like such as The Bucketheads – The Bomb, Nightcrawlers – Push The Feeling On and many more all taking over the charts, while the timeless ‘Insomnia’ by Faithless made its entrance into the world.

After seeing a poster recently for the famed Homelands Festival held in Ireland back in 1999 we were reminded of another flyer from the 1995 Cork-based festival, Féile, due to its outrageously stacked lineup, cheap price and overall simplicity. 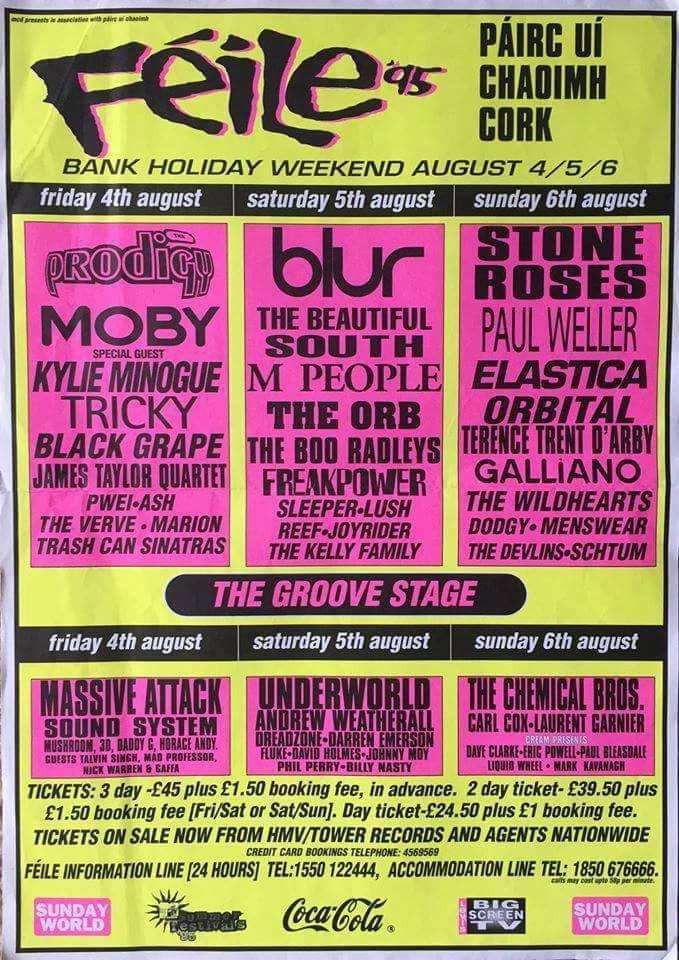 Thankfully, it’s 2019, and the internet is a full blown entity in itself so obviously there are nuggets of Féile ’95 floating around YouTube, including this legendary clip of Moby performing his hit track ‘Go’ live at the Cork gathering.

It’s important to point out that this lineup is indeed possibly one of the most impressive you’ll see in a long time, but plenty of these acts were still yet to release some of their best work, hence why the Chemical Brothers are so low down on the lineup. With that being said, The Prodigy coming off the back of their turbo-powered debut ‘Experience’ is definitely something us at Four Four would have happily paid top dollar to see at Páirc Uí Chaoimh.

If you look even closer you’ll see Laurent Garnier and Carl Cox, with Dave Clarke in even finer print joining the Chemical Brothers on the left hand side of the page. Massive attack’s soundsystem headlines ‘The Groove Stage’, with their main man Tricky making up part of the main stage lineup. Moby, Kylie Minogue and the Stone Roses would all easily headline any festival today, in fact Orbital & Underworld still regularly headline festivals the world over in 2019.

One of the most striking aspects of the Féile flyer is the helpline. There was no nifty Facebook rollout or event pages or online hubs to get all your info. First of all, you have to be lucky enough for one of these flyers to somehow appear within your vicinity, be it on a telephone box, newspaper or hear about it over the radio and then remember the details if you didn’t have a pen and paper. That means then dialing up the number from a landline and waiting impatiently for each option to be announced by the answering machine while it drives up your phone bill.

To recreate Féile in 2019 would cost both promoters and punters a pretty penny. 45 pounds for three days was definitely a steal, factoring in inflation, that equates to about €87.

We dread to think what a ticket to this festival would cost if it was being held today.