Moxie: “The thing I like about Ireland is the ‘no bullshit’ attitude”

Part of the NTS community and family since day one, Moxie is a Londoner who has dedicated her life to finding fresh music and showcasing new artists. Her show and label have acted as a platform for up-and-coming producers for quite some time and with that she’s brought her ‘On Loop’ club night tour around the globe.

She’s set to return at the end of November for a show at Wigwam. It’s a venue she’s particularly interested in as a result of its vast significance to Irish dance music.

“I’m super excited to bring On Loop to Wigwam, I actually went to visit the venue when I was last in Dublin and I know all about the history of Twisted Pepper.” 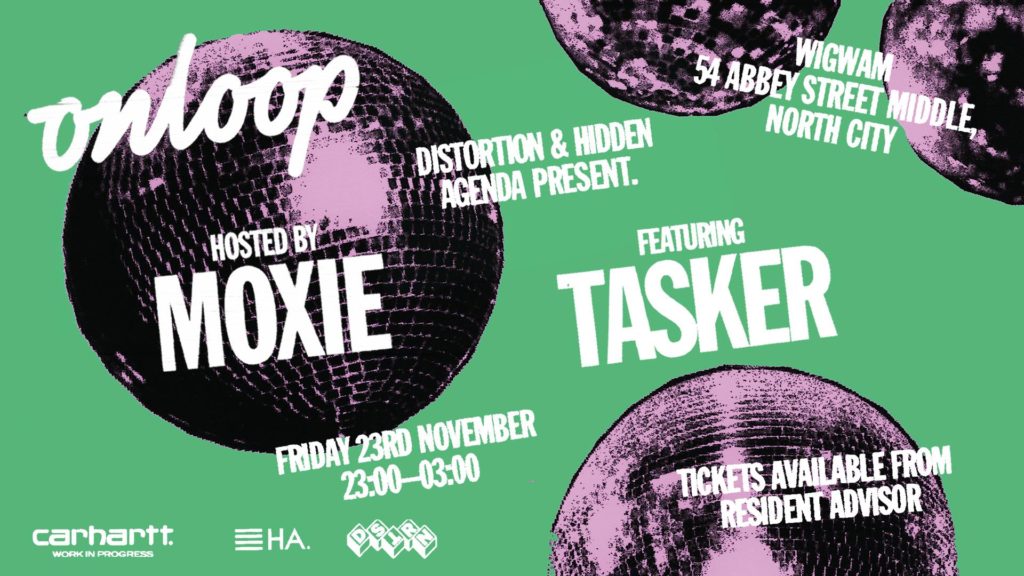 Genuinely interested in club culture and its historical implications, Moxie takes her involvement with it to another level. A show, label, tour, club nights, activism and more, she’s acknowledging the multidimensional and cyclical process of music and club culture. There’s an undeniable love for music and club culture demonstrated via her radio career, DJing and label. So where did it all start?

“I started collecting records when I was 14, so almost 18 years ago now. Over time the DJing turned from a hobby into a career. Same goes for NTS, it was all very casual when Femi [Adeyemi] approached me. The station, back then, was built from his mates and people from around the community and again, over time, it’s morphed into what it is. It’s really quite incredible to see what it’s become and the people it reaches around the world. Also watching the careers of other DJs who started around the same time as me such as Debonair, it’s what makes that station so special.”

Discovering distinct artists in what’s become a saturated industry is a talent in itself. With On Loop, Moxie releases for artists, brings them on tour with her and showcases them on her NTS show. With an impressive roster of releases, and associations with some of the world’s most progressive dance music artists, Moxie is as much a nurturer of talent as she is talented herself. Moxie also keeps gender balance and LGBTQ+ representation at the core of her work through subtle, self-initiated actions. She’s on a perpetual mission to be proactive and practical about equitable representation on the dancefloor and behind the decks.Globally recognised artists like Shanti Celeste and Nabihah Iqbal are just two artists who have released with her ‘On Loop’ label. Moxie is at the forefront of forward thinking global dance music. Her creative endeavours shine a light on new and unique artists and she has had the pleasure of bringing her touring club night to Glastonbury festival, ADE and more: always inviting plenty of esteemed guests to join her. Acts like Or:la, Leon Vynehall, Bambounou, Saoirse, Peach, Avalon Emerson have shared the decks with her, and now she’s inviting the renowned host of Boiler Room, Tasker, to join her for the Dublin edition of the tour. I wondered what we could expect from the upcoming Irish date and how she turned her compilation series into an internationally touring club night.

“The label was born as a way to support new talent via my radio show and it all kicked off with the compilation series ‘Moxie Presents’, from there it’s turned into a party and an official label. I’m always seeking to find new talent as I want On Loop to evolve, but I’d also like to possibly look to do some reissues at some point, as there are some things I’ve found that would be a great fit for On Loop. The party side of things is a whole other matter, we spend a lot of time thinking about who to book, trying to keep the balance of new talent, but also paying homage to the DJs who have been doing this for years and need the credit where it’s due. It can be a fickle industry and I try to use my platforms as much as I can to bring new and old people through. Community is so important to me, without it there’s no backbone to what you do.” 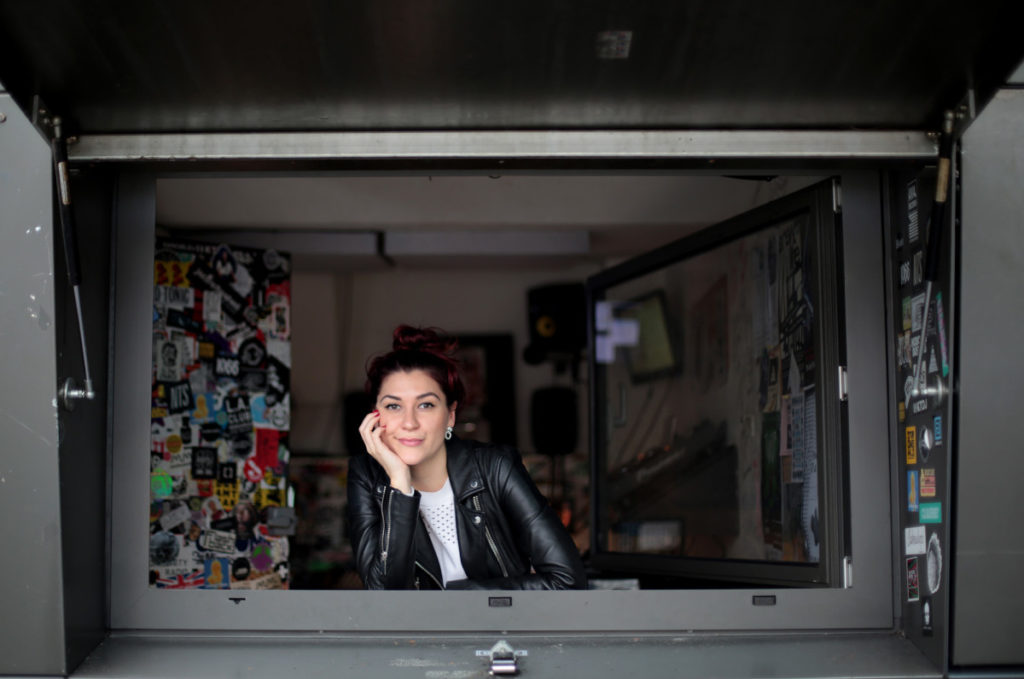 Moxie holds the title of having one of the longest standing shows on NTS. Also home to shows like The Outer Limits, hosted by Jeff Mills, and Tasker’s show 88 Transition, Moxie has become an important member of the NTS gang. Her residency on BBC Radio 1 in London followed a similar ethos of finding and fostering new music and artists. Radio has been significant in Moxie’s career, so I wondered if she would encourage others to follow suit and if she thinks residencies in all of their forms, live or on-air, are important for artists.

“I’ve been with them right from the beginning and as my career has grown, so has the station. They’ve been amazing and really supported me over the years, but I think it’s fair to say I also put a lot of time into planning my shows, especially digging for music and also taking the time to look for guests new and old. Generally speaking though, I think residencies are a really great thing, especially for club culture. If you’re an up and coming DJ there’s no better experience than having somewhere you can play regularly, as it forces you to search for new music.”

Moxie, as a born and bred Londoner, confidently say that she’s experienced much of what goes on in clubland in her hometown. The city is seeing an excess of impersonal, commercial-scale events paired with a lack of community based small club nights. Back in Dublin, these community-focused nights are exactly what give the city its club scene reputation. I ask her to weigh in.

“London will always have a vibrant music scene as there are so many different pockets of communities here. It’s frustrating there aren’t enough smaller scale clubs to host those DIY parties where you don’t have to worry about ‘selling a certain number of tickets’, and you can just put on a fun night with your mates. Although from what I hear there are a lot of underground parties happening in South London, especially around Peckham. When I was younger those were the types of parties I went to in East London, illegal raves, where they were crossing the line of danger, but that also added to the experience. Pre-Shoreditch, when you could host a small rave in the basement of a clothing store on Brick Lane. Times are different now and you have to be inventive if you want to do something different. It’s all about having that space to experiment and make mistakes, what’s born from that is creativity and the unexpected.”

The ‘Moxie Presents’ compilation series has become a reliable source of new music over the years, and sifting through music for her compilations, club nights, labels and radio must be a tiresome process. I wondered how Moxie keeps a clear and direct head when curating.

“I always have a list on the go of people I want to get in touch with, mostly artists I’ve been supporting on the show. There are usually a few key people that I start with and then once they’re locked down I work around that and look at what else the compilation benefits from musically. I usually work on them for the best part of nine months, but it’s so worth it when it all comes together. I also have a rule that with each compilation there must be one more female identified producer than the last, until that happens the compilations aren’t finished.”

Moxie brings her On Loop tour to Dublin this November, as part of Distortion’s winter series which features a line up including artists like Baba Stiltz, Skee Mask and more. It’s Moxie’s first time bringing this show to Dublin, so I wanted to find out what we can expect from it.

“The thing I like about Ireland is the ‘no bullshit’ attitude, and always keeping the energy high. It’s the first time we’re inviting Nic Tasker to the party, which I’m really excited about as I’ve been a fan of his Whities label for some time now. At the moment I’m quite enjoying playing faster, but always keeping it groovy, but then again it always depends on the vibe of the night, so we’ll see… I’ll definitely be playing new tracks from the compilation though.”

Moxie’s career in music is rooted in her teenage years, with countless internships, placements and initiatives taken to make sure that her passion and hard work manifested into a career of music. She offered advice to anyone struggling to keep their head above water in the music industry, keeping in mind London’s reputation of being ‘The Big, Bad City’ for someone pursuing a passion in.

“This year has definitely been testing, but I’ve also had a really amazing time, touring the world and creating memories with friends. Your health always has to come first and as much as partying can be fun, it has its limits and it’s always about knowing when to call it a night. I eat really healthy and drinks tons of water each day, although I wish I had more time for exercise, that’s definitely something I need to change in my life. I always believe everything and anything is there for anyone, you just have to really want it and work hard, plus believe in yourself, which isn’t always the easiest thing.”

Moxie plays Wigwam this Friday. Get involved on the event here and pick up tickets here.