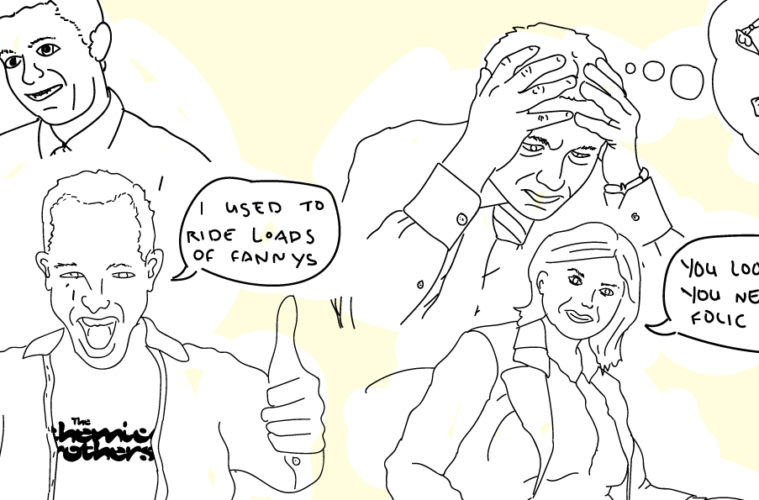 1. The supervisor who thinks he’s your mate.

Always calling you mate or buddy even though you’d both avoid eye contact in Tescos.

Swapped doing bangers in the temple every week with the lads for weekly pints in coppers with the guys after his girlfriend (now fiancee) got pregnant way too early into the relationship. Still reminisces of the glory days and sticks on The Prodigy – Music For The Jilted Generation every morning when he goes out for his daily jog.

Asks if you heard the Kolsch essential mix but he only listens to Bastille nowadays.

Only working there 6 months but has already used up 10 sick days which all happen to be taken on Mondays. Lived for his 2 weeks in “Beefa” each summer and his weekend’s aways in Liverpool with the boys. Most likely covered in sleeve tattoos and a regular in the Claddagh Ring on Saturday mornings. Thinks Lovely Laura is an incredible musician.

3. The ancient dinosaur who you have absolutely nothing in common with.

Calls your music “That bang bang shite”. Used to run his own company back in the day. Bought two or three houses during the celtic tiger boom off the strength of the company which went into liquidation during the recession. Lost everything, is angry with life and resents everyone especially the 30 year old boss who is 25 years younger than him and makes him go get coffee for everyone.

The sound of the Angelus makes him fall asleep.

4. The lad who can’t look you in the eye ever since he made a show of himself at the Christmas party.

Had sex in the toilets of the office party with the new girl, then proceeded to ignore her for the next three months turning every female in the office against him. Is fairly sure he made a pass at the bosses wife but blanked out after his 15th free Jameson and can’t remember anything. Spends most of his evening looking for a different job on Jobs.ie in the hope that his nightmare can end.

Will continuously put The Fratelli’s ‘Chelsea Dagger’ on during the forthcoming Christmas Party.

The “Mammy” of the group, who’s always “so proud” of the team and what they have achieved. Originally from down the country but lives in Dublin the last few years. Likes to talk her position up to higher than what it is. Has cost the company 50k in maternity leave pay over 10 years. Now onto her 4th child with no sign of stopping any time soon.

Genuinely concerned for your wellbeing. Also worried you’ll drop her child when it’s subjected to a work visit.

Tells you to stop putting that shit into your body, then consumes 4 cans of XL Monster Energy.
Enjoys listening to Muse. Has two kids, lives in rented accommodation and has no prospect of getting a mortgage but still thinks YOU need to sort your life out!