Top 10 Fabric mixes of all time

Ever since the London club launched it’s eponymous and fabriclive CD series back in 2001 with resident Craig Richards’ introductory mix, fabric has delivered in and around 70 minutes of the finest mixes from the world’s biggest DJs every month.

Not only has the series gifted us valuable deeper insights into the minds of the industry heavyweights and what makes them tick across an uncontrollably vast range of different genres, but has also served as a valuable institution for allowing younger, upcoming artists to shine in a Boiler Room-esque format that has been around long before Boiler Room existed.

At the time this was a brand new Villalobos mix comprised entirely of his own unreleased material, about a year after his 45-minute long track “Fizheuer Zieheuer” and in and around the peak of minimal techno popularity. As soon as the instantly recognisable glitchy shuffles of “Groove 1880” come into the fold a minute in, the listener knows exactly what they are in for. What follows is a dive into the weird and wonderful world of Ricardo, with standout tracks like “Primer Encuentro Latino-Americano” providing reality checks and taking you out of his hypnotising rhythms that maintain over the course of the hour.

Before Diplo was headlining Tomorrowland and producing for Bieber, he actually held quite a respectable position in the wider music community, with his eclectic DJ sets and Hollertronix parties he ran in Philadelphia. This variety was seen in the tracklist of his Fabriclive mix, which sees names from all corners of the hip hop, electronic and dancehall world.
From mixing Killer Mike into Cybotron, Aphex Twin into Cajmere, and The Cure into Outkast and DJ Deeon, Diplo somehow connects the dots between genres successfully and serves as the ultimate party mix in the fabric catalogue.

The Minnesota native and HUSH label owner stepped up for the latest edition in the mix series and delivered one of the most memorable techno offerings the series has seen. By blending multiple styles amongst HUSH releases, he generates an eerie and apocalyptic feeling atmosphere within the 29-track mix, which opens with the timeless speech taken from Charlie Chaplin’s The Great Dictator and descends down the rabbit hole of hefty minimal techno, which rides a steadfast train of kick drums through a jungle of creepy atmospheres. His departure on Anthony Rother’s ‘Technic Electric’ punctuates the Klockwork artist’s mechanical and orchestral take on one of the more rigid electronic genres.

James Murphy & Pat Mahoney, the frontman and drummer of legendary dance-punk outfit LCD Soundsystem, share an authentic mix, not far from what you would hear in the Paradise Garage and other NYC nightclubs of the mid-80s disco and early house scene. Opening and closing the mix with two tracks from DFA affiliate and avant-pop composer Peter Gordon sets the tone for an art-disco opus featuring tracks from Chic, Donald Byrd, Peech Boys & Was (Not Was). For LCD fans this mix is a must listen, as you really discover the tracks that helped inspire Murphy & co. come up with their hits all those years later. 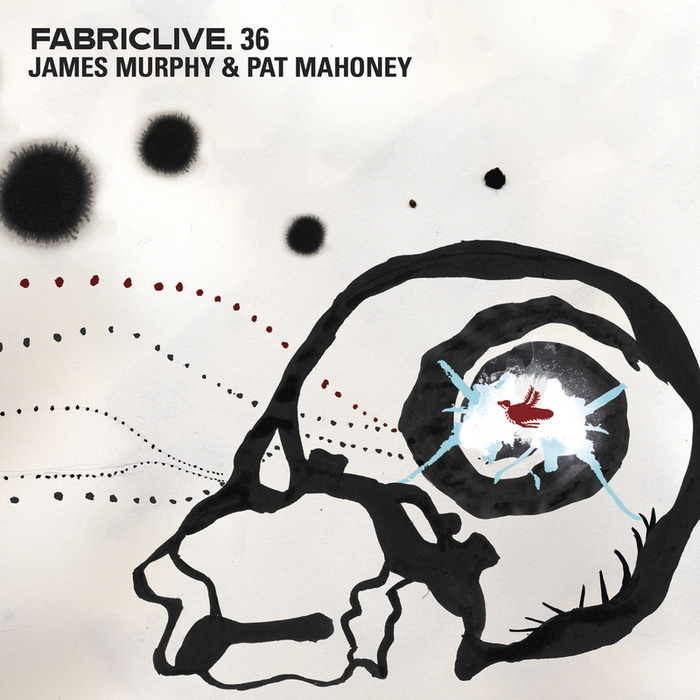 Nina Kraviz relentlessly strings together 41 tracks in 76 minutes (that’s an average of 1 minute and 51 seconds per track) in a mix that solidified the Russian DJ and producer among techno royalty when it was released. Combining forgotten 90s Midwestern techno in the form of tracks from Woody McBride & DJ Slip with more modern excursions such as releases on her ever-evolving label, Trip, the frantic mixing style makes tracks that go on for longer than 2 minutes like Kraviz’s own “You Are Wrong”, PTU’s “A Broken Clock Is Right Twice A Day” and Aphex Twin’s “fork rave” stand out even more and appear oddly poignant and beautiful among the chaos.

The jungle and drum n’bass icon mixed up a frantic CD for the club in right before the end of the noughties. It’s important to note that one of the most distinctive features of fabric was there constant support for leftfield genres such as drum n’bass, grime and dubstep. Fabric’s key role in driving London’s club scene relied heavily on their support for genres that emanated directly from the city and Bukem’s mix somewhat embodies that, kicking off with two tracks off his own Good Looking label which itself has had a commanding role in shaping the sound of jungle and drum n’bass over the past two decades. Choppy and unpredictable mixing from then on in, with a healthy serving of Good Looking records throughout.

Before the release of this diverse mix, Kieran Hebden aka Four Tet was known mostly for the sample based, hip hop inspired electronic productions from his previous albums on indie label Domino than a dancefloor destroying DJ we all know and love him for today. But this mix was the natural stepping stone for Hebden’s transition into dance music that happened between his albums “There Is Love in You” and “Pink”, and also saw the premiere of his now often used side projects Percussions & KH which he uses when releasing 12” DJ tools. The landmark track in this mix obviously is “First Born”, a then-unknown garage epic made by an anonymous producer under the name Crazy Bald Heads in 1998. The track sounds like it could’ve been made today, and Hebden obviously knows it’s appeal – he plays his own remix of the track less than 10 minutes later after dropping Youngstar’s grime classic “Pulse X”. The mix does heavily slant toward garage, but we also see glimpses of a more melodic, traditional house style that Hebden himself has adopted more recently towards the back end of the mix, with Ricardo Villalobos’ “Sieso”, and the Steve Reich-esque breakdown in his own production “Pyramid” proving to be seriously moving, both figuratively and literally. An absolute sonic triumph from front to back.

For many, this mix was the introduction to Daniel Avery, and what a landmark greeting he gave us. In terms of both track selection and technical mixing skills, it’s hard to find many other mixes in the fabric catalogue that bring forward something as captivating as Avery’s explosive offering. The same brutal, stone-faced sound aesthetic found in his debut LP Drone Logic released a year later shines through over the course of the 70 minutes and never gets old. With classy, acid-tinged, midtempo bangers such as Nautiluss’ “Troubleman” and Avery’s “Naïve Reception” checking the dance workout bangers nestled amongst more subtle cuts like Simian Mobile Disco’s “Supermoon”, this mix brought forward one of dance music’s most unique and memorable names and styles to the forefront, and we have fabric to thank for that.

The man behind Mo’Wax and UNKLE provided the first fabriclive mix and certainly didn’t disappoint. Being one of the respected residents within the club itself, he somewhat embodies the multi-faceted atmosphere of fabric itself.
With DJ Shadow’s ‘Endtroducing’ being released via Mo’Wax it shouldn’t have been a surprise when the UK dance music pioneer drops ‘Organ Donor’ a couple of tracks in, but the seamlessness in which he blends genres can’t go unnoticed. From there, we’re treated to more and more genre hopping, incorporating all corners of house, breakbeat, hip hop and techno, ebbing and flowing through his own tracks and numbers released via his own labels.

Often cited by many as one of the best fabric mixes of all time. A tasteful collection of electro house, techno and dance-punk, the mixing skills the UK duo display are second to none. Deep within the crux of the mix, Swayzak unleash the anarchic groove of LCD Soundsystem’s genius “Losing My Edge”, a track, which considering it’s lyrics, is very often misused by DJs in regard to how and when they choose to play it. But it’s almost like Swayzak are aware of this, all of the tension that has been building with the previous house tracks culminates to a head, and James Murphy’s cry of “I was there” feels almost seismic in it’s impact. They finish off the mix with an off-kilter German electropop number; “Bars 1,2,3,4” by Marz.