The ultimate guide to Metropolis Festival 2017

METROPOLIS FESTIVAL RETURNS TO DUBLIN’S RDS AT THIS WEEKEND WITH THEIR BIGGEST LINEUP YET. ONE OF THE FIRST FESTIVALS OF ITS KIND IN IRELAND, METROPOLIS IS A PREDOMINANTLY INDOOR FESTIVAL WITH A MASSIVE FOCUS ON PRODUCTION AND ARTS, HOSTING SOME OF THE BEST LIVE ACTS AND DJS THAT THE WORLD HAS TO OFFER.

This year’s edition sees a lineup with a perfect contrast of both the best of up-and-coming talent as well as a host of electronic music pioneers. Spanning across two days, this week’s bank holiday weekend is set the boast one of the biggest lineups Ireland has seen.

Metropolis kicks off on Saturday at 4pm, with the first day of the festival consisting of one of Dublin’s all-time great lineups for the Metropolis Opening Concert. The day kicks off with Sense resident Jack Dunne who’ll set the mood before techno’s favourite boyband FJAAK. The German trio will bring their world famous live-set to the RDS for their Dublin festival debut. They’ll be followed by English electronic duo Death In Vegas before some of the pioneers of electronic music take over, firstly French house legend Laurent Garnier who’ll be followed by what we think is the most exciting act of the weekend Leftfield performing Leftism.

The Industries Hall stage will also be open on Saturday from start to finish, hosting a huge local lineup including the likes of Tara Stewart, Mango & Mathman, Mix & Fairbanks and Orange Tree Edits, who’ll provide everything from grime to disco throughout the day. 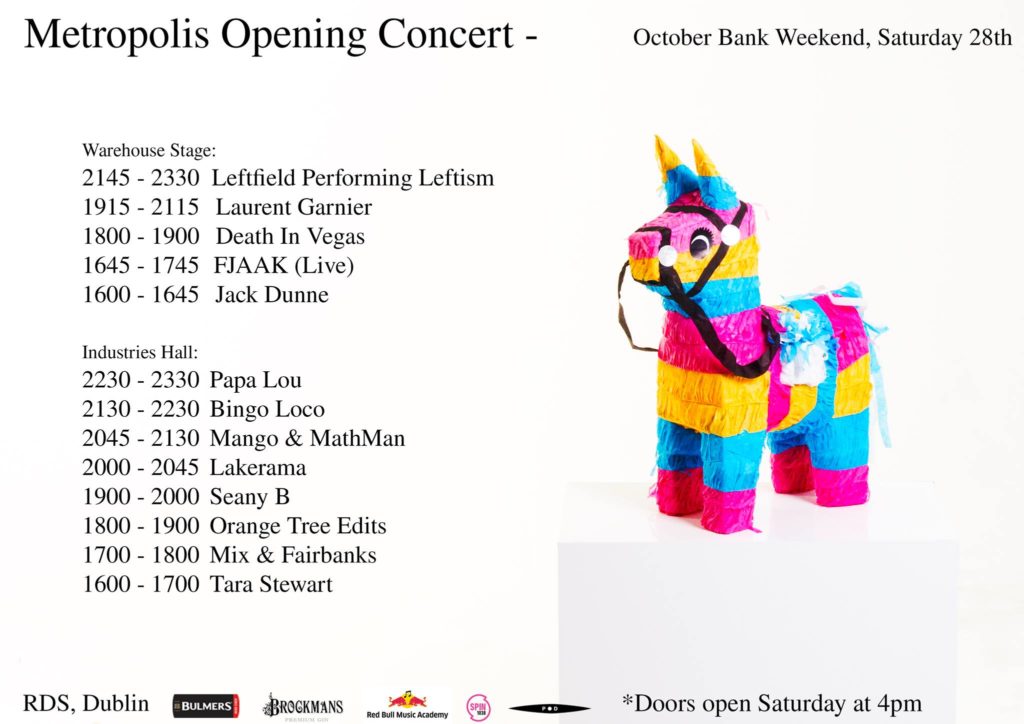 The Sunday of Metropolis this year is simply looking incredible. Techno legends such as Adam Beyer and Richie Hawtin will headline the Warehouse Stage alongside Jeremy Underground and Mount Kimbie. Red Bull Music Academy will also host a stage which is dominated by some of the biggest names in house music at the moment with Denis Sulta topping the bill following his huge sell-out show in District 8 last week. Sulta is joined by Australian man-of-the-moment Mall Grab and Peggy Gou as well as some of the best of the best when it comes to home-grown talent- Long Island Sound, Or:la and Krystal Klear.

Across the day you will definitely need to make some tough decisions. For any house or techno fan there’s obviously some acts that would be considered unmissable. Todd Terje returns to Metropolis after a huge performance at the first edition of the festival in 2015. He’ll close out the main stage after Jungle. The Bulmers Live Stage also sees a huge homegrown lineup with the likes of DJ Deece, ELLLL, Hubie Davison, New Jackson and our Forefront competition winner Exit The Void on the bill.

The Industries Hall will once again play host to a locally infused lineup with some of Ireland’s best residents dishing out music across all genres throughout the day. 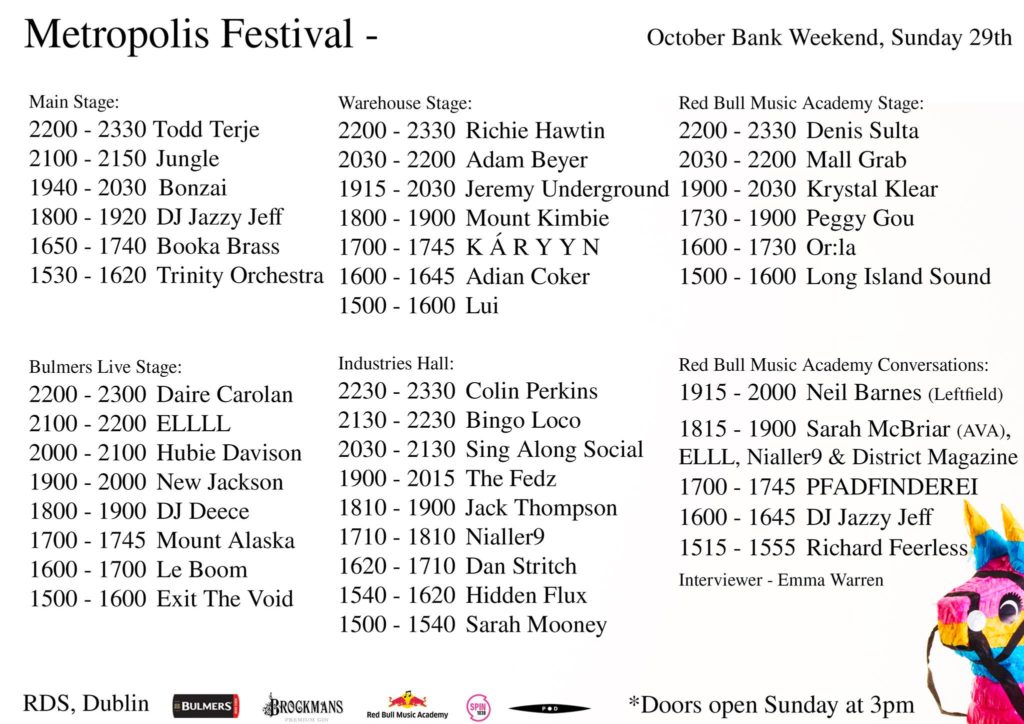 If you would like to take a break from the music Red Bull will also host a conversations area with some extremely interesting panellists speaking throughout the day including Neil Barnes from Leftfield as well as a similar conversation to the one you might have seen Four Four host at AVA Festival earlier this year discussing the differences, similarities and relationship between the North and South of Ireland, this time hosted by District Magazine.

Firstly and most importantly, Four Four will host the best afterparty of the weekend on Sunday. Jeremy Underground, Hubie Davison and the Forefront competition Exit The Void. Mango & Mathman will also look after things in the room 2. This is where you should definitely go.

As always we do understand that some people or somebody that they know will inevitably take drugs this weekend. You can check out our guide to staying safe when using festival drugs below.

A guide to staying safe when using club/festival drugs