The Top 10 European festivals to go to this summer

This week was jam packed full of festival announcements, so we took it upon ourselves to see which festivals are most worth going to all around Europe as your bank account begins to regenerate after Christmas’ onslaught on it carried right into January.

This is not to say that there isn’t enough to see in Ireland this summer because there certainly is, even just between AVA and Life’s announcements this week. With that being said, we can understand if people are sick and tired oh the dreary land we live on and are looking to party abroad.

The Annie Mac-curated festival is entering it’s 4th edition this May, with its biggest lineup to date. Gracing the Mediterranean shores of Malta is an eye-popping collection of house, techno, grime and R&B artists including Bicep, J Hus, Jamie xx, Four Tet, Jackmaster, The Black Madonna, Mike Skinner and Annie Mac herself. The great music coupled with the cracking setting and weather that comes with the Maltese summer; this 4 day festival one not to be missed. 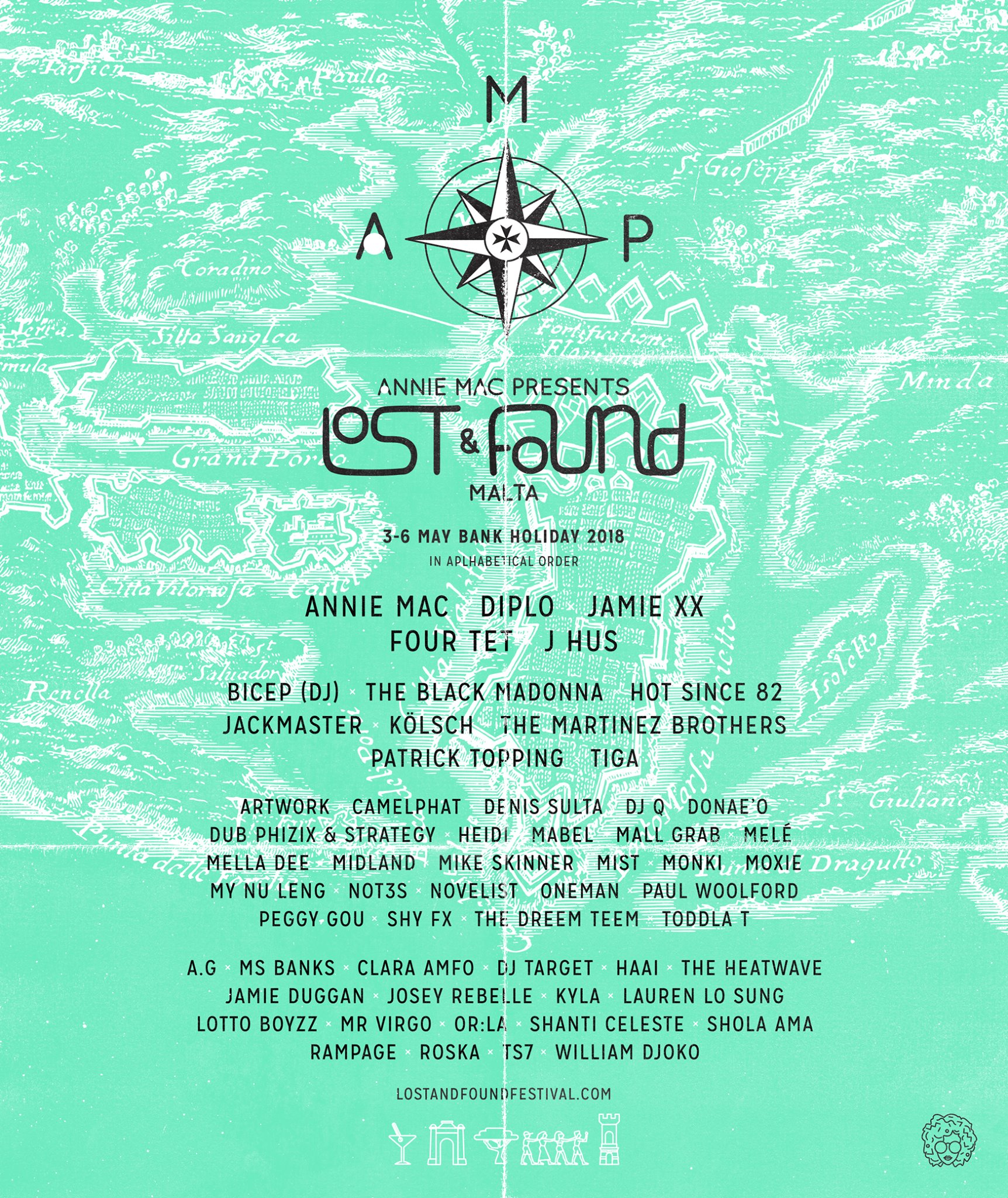 The long-running Dutch festival enters the year with a larger than life lineup of the world’s biggest techno and tech house DJs. It’s uniqueness lies in its sheer scale as it combines a number of world beaters on multiple stages across both days, covering all nooks and crannies between house and techno.

Carl Cox, Jamie Jones, Nina Kraviz, Jeff Mills, Kolsch, Seth Troxler, Sven Vath, Richie Hawtin, and Adam Beyer (who’ll also be hosting the debut Drumcode Festival in August) will all be playing sets over 8 stages, while slightly more underground names such as Dax J, I Hate Models, AnD and a ton more will be holding down other stages across the weekender. Possibly the only festival you could justify going to and sticking to one stage, given the variety between each one. Check out the full lineup right here.

Another Amsterdam Festival taking place the same Bank Holiday Weekend is DGTL, transforming the iconic Docklands area of the city into a house and techno rave. Heavy hitters such as Mall Grab, Call Super, Blawan & Ame will all be playing on the Saturday and Sunday, while established selectors Theo Parrish, Nachtbraker, and a double bill of b2bs in the form of Floating Points b2b Hunee and Schwarzmann (Henrik Schwarz and Ame’s Frank Wiedemann) will act as suitable warm up for the weekend ahead at an opening concert the Friday before. 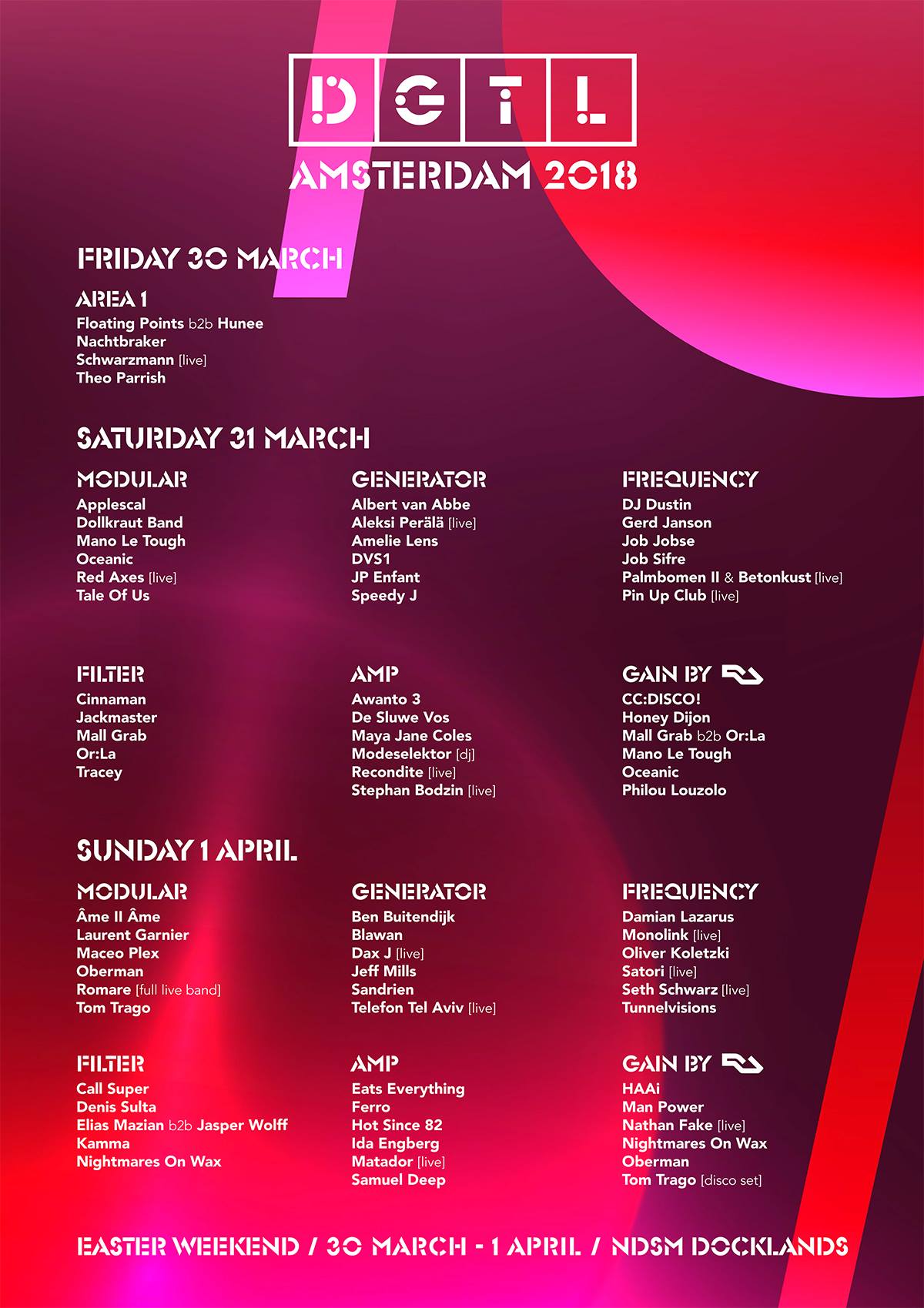 This day long festival takes place in the middle of Boston Manor Park, right outside the centre of London and quite literally under the A4 motorway junction. This year they are treating us to 3 huge back to back sets that’ll be hard to find anywhere else this year. Tech house king Carl Cox goes b2b with Drumcode head honcho Adam Beyer, Innervisions founders Dixon & Ame will play together for an extended 6 hour set and underground favourites Sonja Mounear & Nicholas Lutz are also playing alongside each other. Solo sets come from Nina Kraviz, Dense & Pika, Joy Orbison, Len Faki & Scuba, among others.

In the last few years the Dekmantel crew has seen not only a meteoric rise in terms of the scale and strength of their lineups at their festivals, but also established themselves as a respected and reliable establishment for releasing music from and putting lesser known artists under the microscope with their label releases and “Selectors” series. 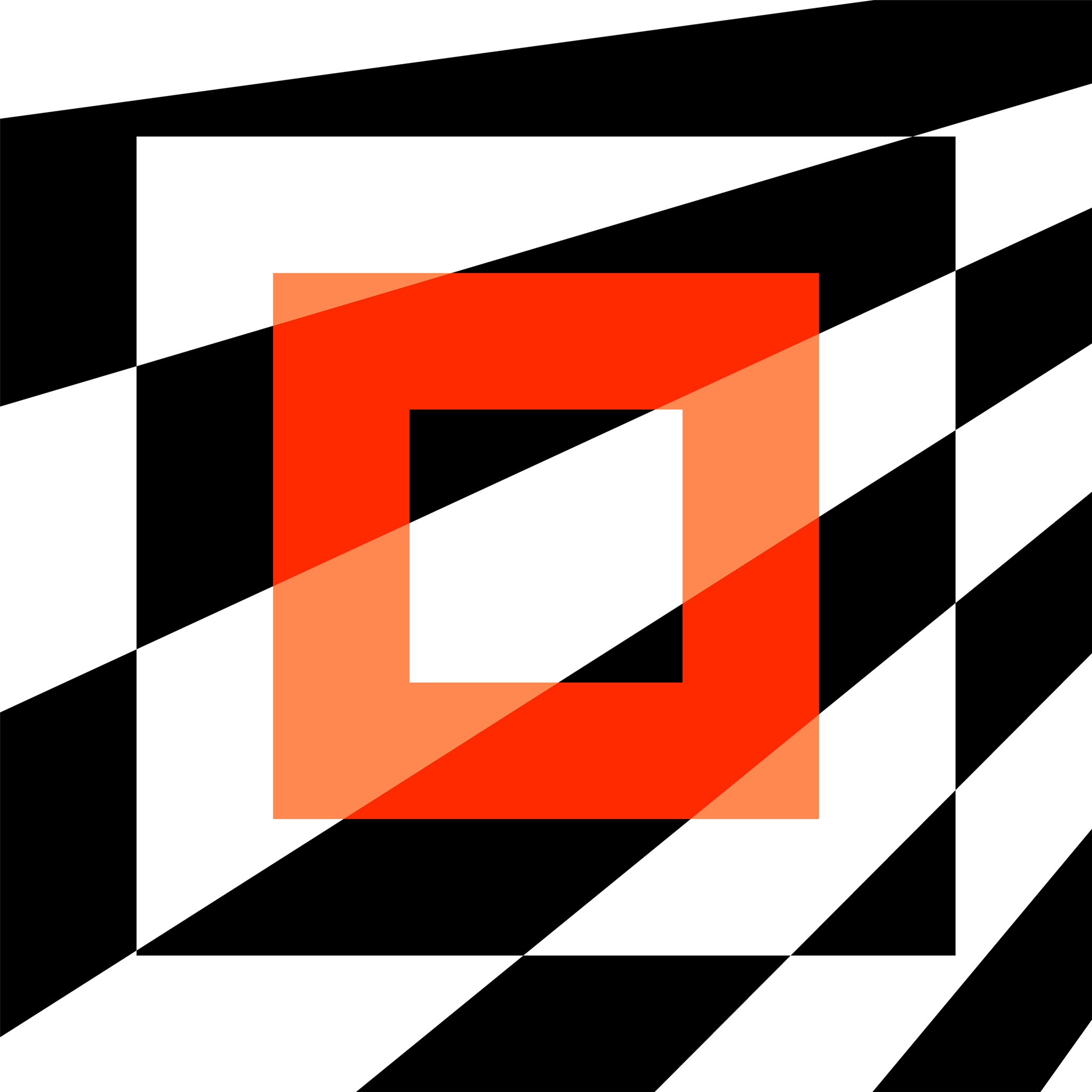 Their lineup announcement carried some trademark Dekmantel uniqueness as they dropped a five minute video which narrated the lineup in its entirety. You can check out the extended highlights from the announcement here, but major names were Orbital, Jamie XX, DJ Stingray, DVS1, Objekt and Palms Trax.

It’ll be tricky to get there though if you haven’t gotten your hands on a ticket as they all sold out within less than an hour of being on sale.

Keep up to date with their announcements via their website here.

The popular London camping festival brings forward a large and eclectic selection of stages across the world of electronic music with promoters such as Circoloco, Defected, HYTE & Glitterbox bringing over prevalent, and more mainstream acts such as Eric Prydz, Green Velvet, Kolsch and Camelphat, as well as a slew of DJs that’re well-loved in Ireland such as MK, Denis Sulta, Jackmaster & Bicep. What sets this festival apart from other festivals with similar names is the presence of other UK genres like Drum N’ Bass and grime being represented, with Andy C, Mike Skinner, Bugzy Malone, Shy FX, Pendulum and TQD filling out slots too. Check the lineup out here.

The legendary Barcelona festival has long championed bringing over the largest names in a variety of eclectic genres.

Entering its 25th year in existence, they have really pushed out the boat this year and dipped into as many different sounds as they could.

Already announced this year is a mix of DJs, live acts, MCs and synthpoppers. Bicep, LCD Soundsystem, Gorillaz, Yung Lean, Motor City Drum Ensemble & Jeremy Underground, a 6 hour set from Barcelona native John Talabot and Wiley will all be appearing at the Spanish gathering. €180 for all three days is a great price, given the wide variety of music on offer, especially with the day/night theme in place. 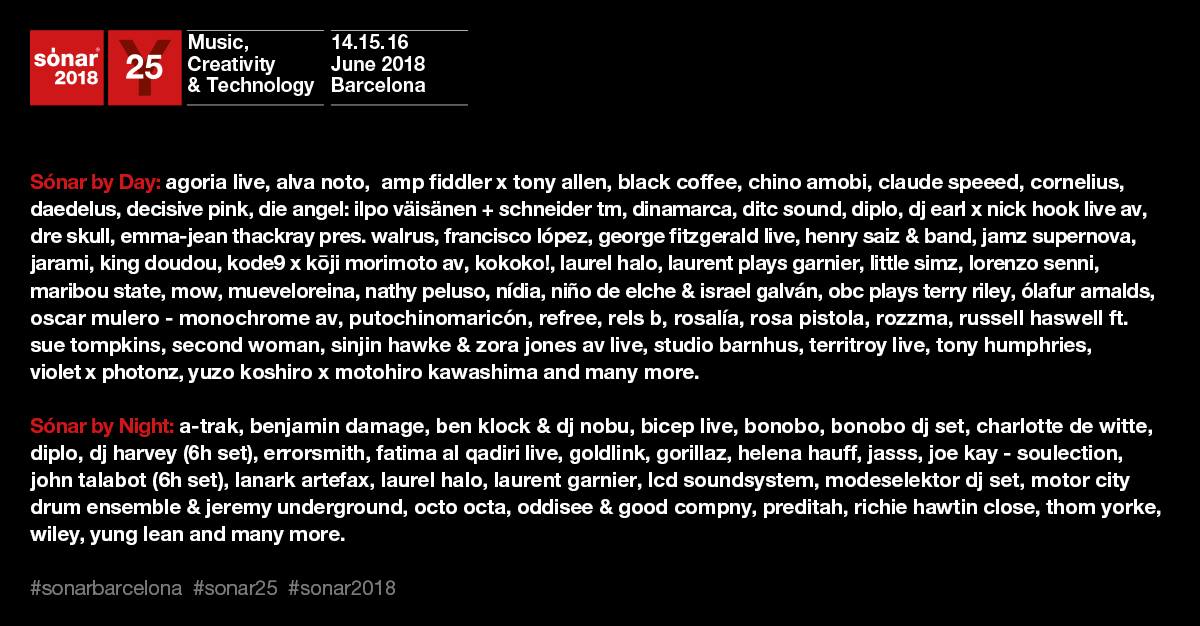 Melt returns for a completely diverse lineup that’s headlined by Tyler, The Creator, The Internet, Florence and the Machine and BadBadNotGood. Electronically, there’s a wide selection of varying from Jon Hopkins, Andhim, the Zenker Brothers and the Black Madonna plus loads more. A weekend ticket comes in at €140, which is an unbeatable price given the stature of all the acts across all genres.

A choice for fans of the more diverse side of electronic music will be pleased to see the lineup for the week-long French festival Nuits Sonores. This year the organisers have selected 4 influential DJs within their own fields to curate four days of the festival. Jennifer Cardini is bringing over Maceo Plex, Dopplereffekt, Skatebard as well as setting up a back to back with Dutch selector Job Jobse. Daniel Avery has selected a comprehensive list of hypnotic techno and electro acts such Helena Hauff, Lena Willikens, Objekt & Call Super back to back as well as HAAi & DJ Nobu. 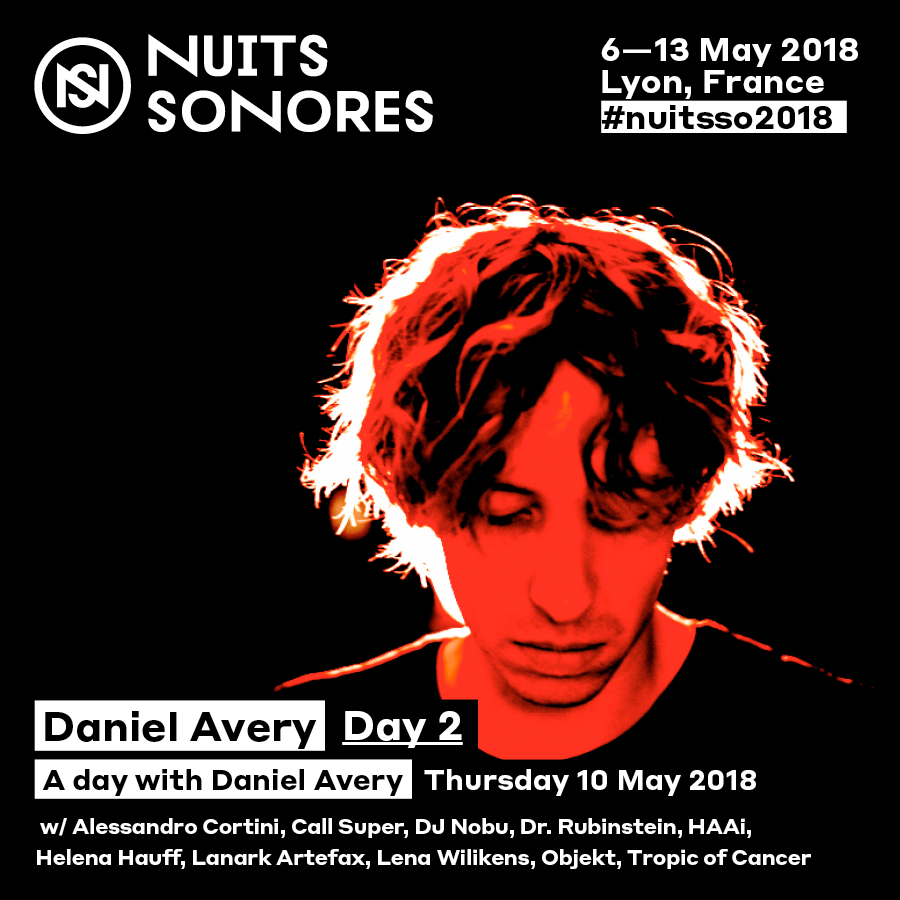 No stranger to diversity in both his productions and DJ sets, Kieran Hebden aka Four Tet has curated what seems like the festival’s most exciting day. As well as a live set from the man himself, Hebden has invited Pearson Sound, Josey Rebelle and Karen Gwyer, as well as close friends and frequent collaborators Floating Points and James Holden too. Paula Temple closes off the festival with a bang, bringing over classic Detroit and Berlin techno DJs DJ Stingray, Amelie Lens and Rebekah.

This Croatian 5-day-festival has made waves around the world the last few years due to the beautiful summer setting at the coastal medieval castle of Fort Punta Cristo and a stellar lineup of acts from all corners of electronic music.

This year’s lineup is yet to be announced, but the last couple of years have seen the shores of the Adriatic Sea host iconic sets from the likes of Motor City Drum Ensemble, Daphni, Ben UFO, Mala, Surgeon and more. Watch the after movie of the 2016 installment here.